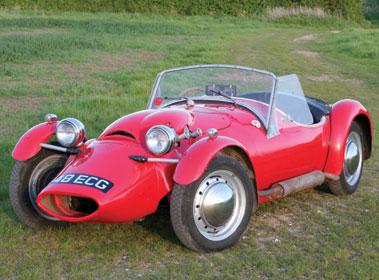 The 'Specials' industry grew up in the 1950s and one of its biggest retailers was Les Montgomery's Super Accessories in Bromley. Les came up with the bright idea of combining the simple and effective Bowden chassis, designed for Ford 1172 components by Bowden Engineering of Ottery St Mary, Devon, with an enlarged version of the very pretty Hamblin Cadet bodyshell, made for Austin Seven chassis by Syd Hamblin of Sherborne, Dorset. The resultant body/chassis kit sold for a bargain £99 as the Super Two (non-essentials like the windscreen were extra!). Available from May 1960 to May 1962, less than a hundred were produced.

This example was completed in basic form by young Malcolm Woodhams, whose initials and date of birth form the chassis number. After a short time he sold the car to the proprietor of South Eastern Motors of Tunbridge Wells, who prepared the car to an unusually high standard as a gift for his wife, Elsie Richards. The cockpit was carpeted and the dash and surrounds given a neat cream covering, a splendid set of matched instruments and a Super Accessories woodrim steering wheel; a pair of black bucket seats piped red completed the cockpit and the hood, too, was black piped red. Under the bonnet, a Ford 100E engine was fitted with twin SUs on a tubular manifold, the gearbox received close-ratio gears, 15in Ballamy wheels were fitted and a high (4.7:1) axle ratio installed to match the gearing. The nose was extended "to look more like a Vanwall" and the car was apparently once raced at Thruxton. Elsie used the car as a toy for occasional outings for some 30 years, by which time it had clocked up barely 10,000 miles. Nevertheless it was extensively restored in 1983-85 at a cost of £2485. The vendor was delighted to acquire it from her and set about making the car handle as well as it looked, adding Panhard rods front and rear, overhauling the rear axle, recoring the radiator and fitting an Aquaplane finned aluminium cylinder head. He also made a new boot floor, doubling its capacity, and stiffened the bodyshell with a propshaft tunnel to dash bridge. The car completed both the Rallye des Alpes and London-Lisbon before its biggest success, winning the 2002 Scottish Malts rally outright. So many trophies were collected that there was no way all would fit in the car! Its adventures were reported in Classic Cars and other magazines at the time. This represents a unique opportunity to acquire one of the finest Specials of its day in original condition and, provided you are under 5ft 10in tall and of slim build, a delight to drive.