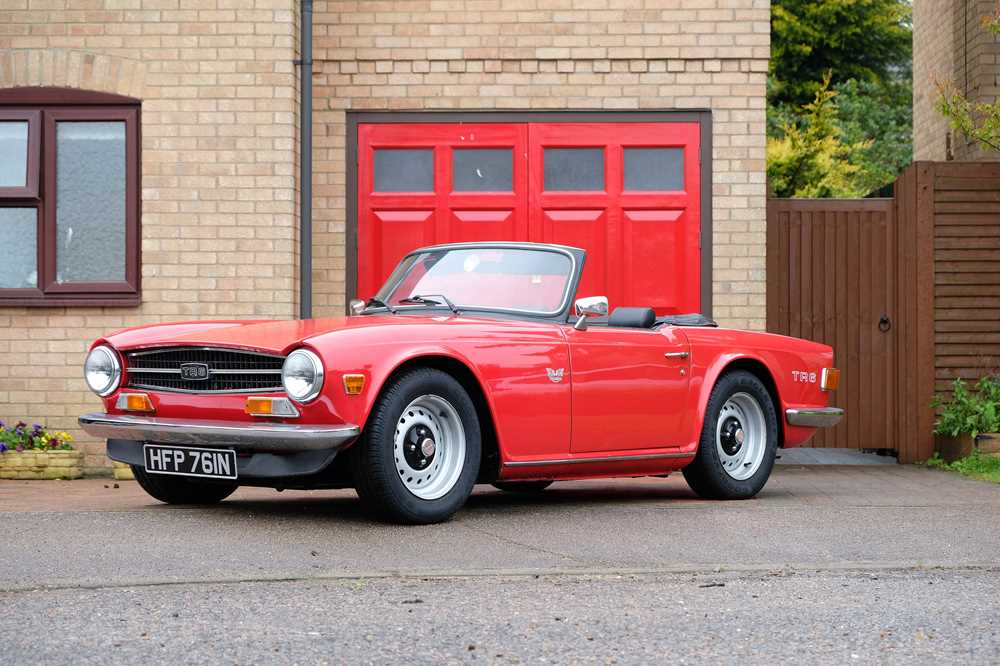 Its sports cars having relied exclusively on four-cylinder engines for the preceding decade-and-a-half, Triumph turned to six cylinders to extend the life and improve the performance of the much loved 'TR' series. Similar to the preceding four-cylinder TR4A - the first TR with independent rear suspension - but with Triumph's 2.5-liter, six-cylinder engine installed in place of the old 2.1-liter four, the TR5 was produced during the 1968 model year only pending the arrival of the TR6. Restyled for 1969 by Karmann of Osnabruck, the TR6 sported a full-width nose and squared-off tail. Under the skin the chassis remained basically the same as its independently-rear-suspended TR4A ancestor's while the 2.5-liter Lucas fuel-injected power unit was unchanged, producing 150bhp initially and a more civilised 125bhp by the end of production.

First registered on 10 March 1975 and originally finished in white, HFP 761N is a desirable home market example and is now offered in red with contrasting black interior. Currently displaying 57,863 miles on the odometer, the vehicle was subject to a long term restoration thought to have commenced in 1988 when it was purchased by a Mr C Sullivan and finished between 1994-1996, with the body being painted in may of 1993.

HFP 761N was acquired by its current owner in April of 2007 and has covered just some 650 miles in the last 14 years. The vehicle is offered with a folder of documentation including a number of invoices and receipts, previous MOTs and some photographic evidence of the restoration.