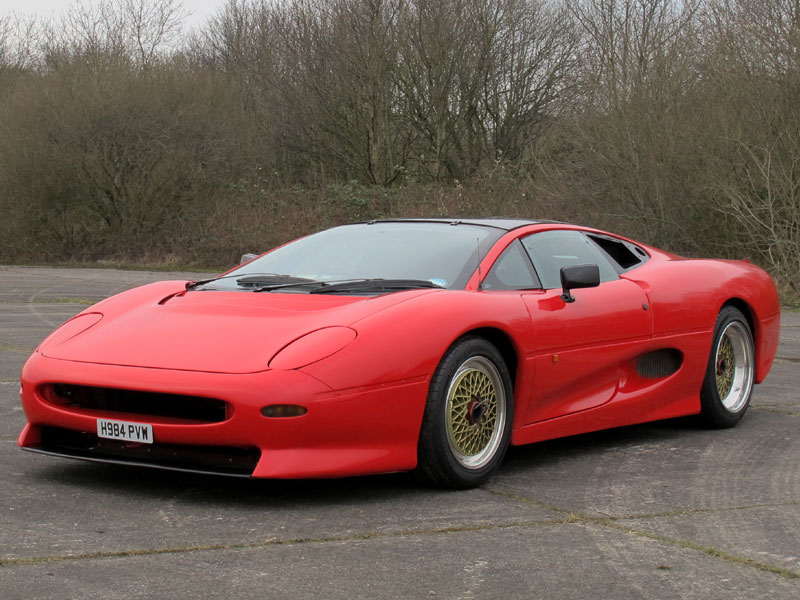 The XJ220 deserves its place in history as Jaguar's first (and thus far only) 200mph plus supercar. Faster and rarer than the Ferrari F40 or Porsche 959, just 281 production examples were made. Conceived by Jaguar's chief engineer Jim Randle, the original XJ220 Concept caused a furore at the October 1988 British Motorshow. However, its ambitious specification raised serious packaging and tyre safety concerns. Tasked with turning the show car into production reality, JaguarSport assembled five prototypes under the watchful eyes of project manager Mike Moreton and chief design engineer Richard Owen. Fabricated by Abbey Panels, the first two were not only smaller than their successors but also featured radically different A-posts. As an ex-March, Shadow and Williams F1 designer Owen was keen that the prototypes be put through their paces by Silk Cut Jaguar / TWR Racing drivers including Andy Wallace, John Neilsen and David Leslie.

Completed on 7th September 1990 and often helmed by Le Mans winner Andy Wallace, the car on offer - Prototype 002 - was cited in various Jaguar press releases as being responsible for two XJ220 developmental milestones: `in September 1990 Prototype 002 achieved 186mph at the Bruntingthorpe circuit. The following month the same car successfully completed 24 hour durability tests at the Millbrook proving ground'. Handwritten notes on file from Kelvin Nevitt (a long serving Jaguar manager) reveal that 002 played an important role in high-speed endurance, transmission durability, ride / handling and Bridgestone tyre testing. Subject to three updates and a colour change from Silver to Red whilst being evaluated, the two-seater was present at the Nurburgring in September 1991 when its sister car - Prototype 005 - set a new production car lap record of 7 minutes 46 seconds (which stood until 2000). Among the cars personally inspected by HRH Princess Diana during the official opening of JaguarSport's Bloxham facility a month later, 002 was mothballed thereafter.

Doubtless inspired by the Jaguar XJ220C that took GT class honours at the 1993 Le Mans 24-hours, Allen Lloyd (of Lloyd's chemists), Richard Hassan (son of legendary engineer Walter Hassan) and Tom Priestnall (of restorer / race preparer Renascence Cars) formed LHP Racing with a view to fielding a team of cars in selected BPR GT and BRDC GT events not to mention the 1995 Le Mans 24-hours. Richard Hassan negotiated the purchase of two XJ220s from Jaguar: Prototype 002 and a later production specification car that had been crashed on a demo run at Goodwood. Sadly, the hoped for sponsorship money was not forthcoming and Allen Lloyd soon distanced himself from the stillborn project. The damaged car was subsequently broken for spares and 002 put into storage at Renascence Cars which is a pity because it may have had quite some potential as a racer. Some 18cms shorter, 15cms narrower and circa 180kg lighter than its production siblings, the Prototype also had the advantage of a twin-turbo Heidegger V6 race engine (closely related to the unit in TWR's XJR-11 Group C cars). Variously described as being of 3.2-litre or 3.5-litre capacity and allied to a five-speed FF Developments transaxle, the compact powerplant was set-up to come on song at 4,000rpm and had considerable tuning potential.

Tom Priestnall's sale of 002 to American collector / restorer Anthony Parkinson without Richard Hassan's knowledge prompted a lengthy legal battle that ran from 1999-2005. The upside of the litigation being (i) a letter from C.G. Vacy-Ash Esq - Director of Legal Affairs for Jaguar Cars Ltd - stating that `we claim no interest in this vehicle' and (ii) inspection reports from both Robert Loades of Abbey Panels and Jim Randle which support the car's true identity / provenance. Sold on with clear title after the High Court's final ruling, 002 has been in the current ownership since November 2007. Entrusted to renowned marque specialist J.D. Classics a year later, the Jaguar was extensively recommissioned with attention being paid to its engine, gearbox, suspension, brakes and electrics etc. Documented via numerous photographs, the work took 791 man hours and £69,690.05 to complete. Road registered with the assistance of the Jaguar Daimler Heritage Trust during late May 2009, the Prototype has been the subject of feature articles in Jaguar World and the July 2013 issue of Classic & Sportscar. Highly original, 002 boasts the same chassis, red livery, engine/gearbox, dashboard, Betron Foray seats and Dymo labelling with which it ended its testing duties. An important part of the Jaguar XJ220 story, this unique prototype (001 was crash tested and then recycled into the Ford GT90 Concept car) is offered for sale with large history file and V5C Registration Document.
Share this page: