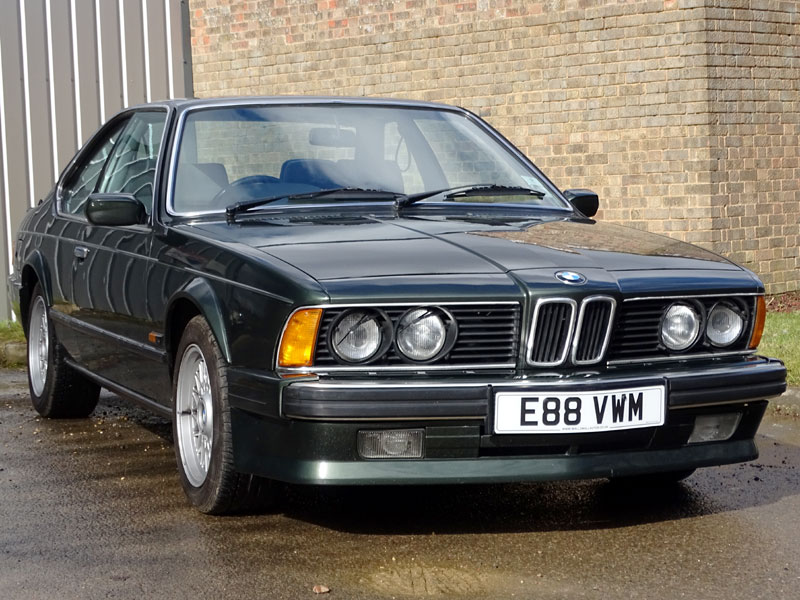 - Main dealer history from new until 2006

- Described by the vendor as in "superb original" condition

The sleek, Paul Bracq-penned, four-seat 6 Series Coupe was introduced in 1976 as a replacement for the aging CS and CSL models. Code named E24, the newcomer borrowed heavily from the contemporary E12 and E28 5 Series Saloons and was of unitary, all steel construction. At launch, the range comprised two models - the 630CS and 633CSi; the bodies for which were manufactured by Karmann prior to production being taken in-house. Suspension was fully independent by semi-trailing arms and coil springs, braking by ventilated discs all round and steering by a ZF worm and roller system. The more powerful 635CSi swelled the line-up in 1978. It was equipped with a SOHC 3,453cc straight six engine, and standard equipment included a five-speed manual gearbox and boot lid-mounted spoiler.

In 1982, the switch from E12 5 Series platform to that of the E28 resulted in changes to the chassis, suspension, engine and both exterior and interior styling. However, the most impactful change in the model's lifetime was implemented for 1988, and included a move to federal-style impact bumpers, ellipsoidal headlamps, Michelin TRX tyres and rims and upgraded leather interior trim - these were known as 'Highline' cars. Production of this generation of 6 Series cars ceased in 1989 after some 86,216 examples had been produced. The model was effectively succeeded by the dearer, more complex 8 Series.

The lovely-looking February 1988 Highline on offer is finished in Malachite Dark Metallic Green and trimmed in Silver-coloured leather. Its original bill of sale totalling £36,332 includes such extras as a limited slip differential, electric radio aerial, and Toronto 4 audio speakers. A one-owner car until 2007, the Beemer is understood to remain a very original example that has covered 146,000 miles to date. It comes complete with main dealer history covering its first 15 years and original BMW toolkit.
Share this page: