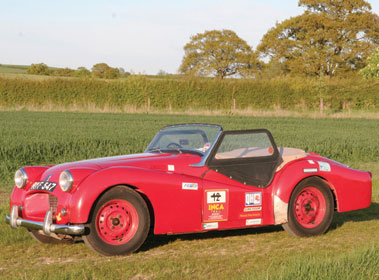 Painstakingly restored for the vendor in 1992-94 and extensively featured in Classic Cars magazine at the time, including the September 1993 cover, this original right-hand drive TR2 was refurbished as close as possible to its 1955 specification, including 1991cc engine, crossply tyres, rubber bushes and correct TR2 springs, not the over-hard components often fitted to restored cars. The benefits of this specification for road rallying have been extensively demonstrated by the vendor, winning trophies on events as diverse as the Rallye des Alpes, Scottish Malts and Inca Trail. The Triumph TR2 was one of the most successful rally cars of all time, its design refined by Ken Richardson with rallying in mind, featuring a very strong, torquey engine, robust chassis including sump and exhaust protection, seven-speed gearbox, high overall gearing and small frontal area.

This car was carefully prepared for the 14,000-mile Inca Trail in 2001, claimed to be the longest rally ever, and still carries much of its livery - and scars - from that event. The only modifications from standard were Aeroquip brake hoses and K&N air filters. The care taken with preparation - and preservation during the event - was rewarded with a second in class and a car that was running as well at the end as at the start; indeed it was the only car driven home from Tilbury Docks on the rally's return from South America! The engine has covered c30,000 miles since its major overhaul, as has the overdrive gearbox (operating on 2nd/3rd/4th). The MOT is valid to 18 May 2010. A substantial folder is included with bills for the restoration, much history and magazines where the car has featured. Recent outings have included demonstrations at the first Rally Show at Chatsworth and the 2007 Wales Rally GB in the Millennium Stadium, Cardiff.
Share: