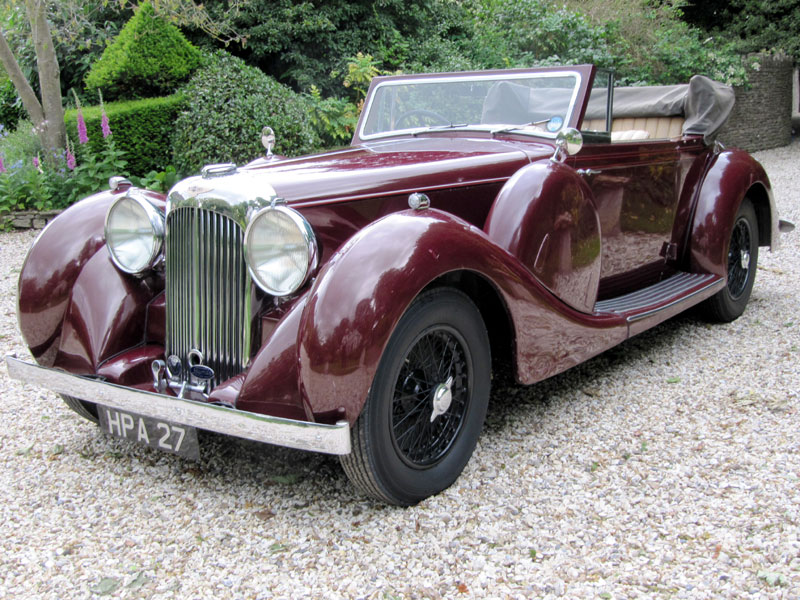 Wilbur Gunn was an American of Scots descent who came to the UK as an opera singer and began his automotive career by building twin-cylinder tricars in the greenhouse of his home in Staines, Middlesex. He formed the Lagonda company during 1906, apparently naming it after a river near the town of his birth - Springfield in Ohio.

Gunn quickly progressed to four wheels, building a strong sales platform in Russia after winning the St Petersburg Trial of 1910 with his six-cylinder Torpedo model. Though the founder passed away in 1920 at the relatively tender age of 61, the company continued to develop, producing a range of sports models that led directly to its historic 1935 Le Mans 24-hours victory. Unfortunately, triumph on the tracks wasn't an automatic guarantee of sales in the showroom and the books were no longer balancing. The cavalry arrived just in time, however, in the form of solicitor Alan Good, who reputedly just outbid Rolls-Royce to purchase the ailing business for the princely sum of £67,000. Not only did he save the company, but also managed to lure W.O. Bentley away from Rolls-Royce - a coup by any standards. Now rechristened LG Motors the concern was quickly restructured and the old model range dropped in favour of a new one for the 1936 model year.

In truth, the newcomers were more evolution than revolution - though none the worse for that. The LG45 was based on a revised version of the M45 chassis equipped with more compliant springing, Luvax dampers and Girling brakes. The engine was a refined, quietened derivative of the 4453cc straight-six Meadows unit that had successfully powered the M45. The Meadows gearbox now had Lagonda designed and manufactured synchromesh on the top two ratios. Overseen by the combined talents of W.O. Bentley and Frank Feeley, the LG45 was a notable blend of luxury and performance and well received by its public.

Model revisions to the LG45 were known as 'Sanctions'. The Sanction Two cars of 1936 brought twin Scintilla Vertex magnetos, while the Sanction Three ones of 1936/1937 featured: an improved cross-flow inlet manifold that was cast integrally with the cylinder head and to which the carburettors were now bolted directly; a lightened flywheel that allowed engine speeds of up to 4,000rpm; and a rear stabiliser bar to improve handling and roadholding. The LG45 was offered in Tourer, Drophead Coupe and Pillarless Saloon guises, or as a bare chassis for those favouring bespoke coachwork. Total production of the model is understood to have been around 278, some 150 of which are thought to survive today.

The LG6 debuted alongside the V12 at the 1937 Motor Show and featured the final development of the venerable 4.5-litre Meadows engine. Though similar to that of the V12, the LG6's chassis had nothing in common with the earlier LG models being of diagonally cross-braced rather than ladder construction and featuring independent front suspension by wishbones and torsion bars. Braking was hydraulic and included a tandem master cylinder for increased safety. A total of some 82 LG6s were produced of which around 50 are documented by the Lagonda Club.

The LG6 being offered is a 1938 example. Finished in Maroon teamed with a Beige-coloured interior, it apparently started life as a Saloon and was converted to a Drophead Coupe during the late 1960s. It has remained within the same family ownership for the last 33 years, for whom it replaced a racing LG45. Much enjoyed, 'HPA 27' has completed several overseas Lagonda Club rallies and has toured extensively in France and Scandinavia. It has also carried out promotional trips around the Cotswolds, undertaken film work with the vendor at the wheel and frequently served as a wedding car for friends and family, "adding real class to the day".

Following an engine breakdown en route back from the Circuit des Remparts d'Angoulême in 2006, the unit was treated to an unhurried professional overhaul as well as the fitment of a new block obtained from LMB Belgium, since when the Lagonda has covered less than 2,000 miles. The vendor now considers the bodywork, paintwork, interior trim, six-cylinder engine and four-speed manual gearbox to all be in "good" order and is selling the LG6 complete with original buff log book, years of service documents dating back to 1958 and an MOT valid into June of next year.
Share: