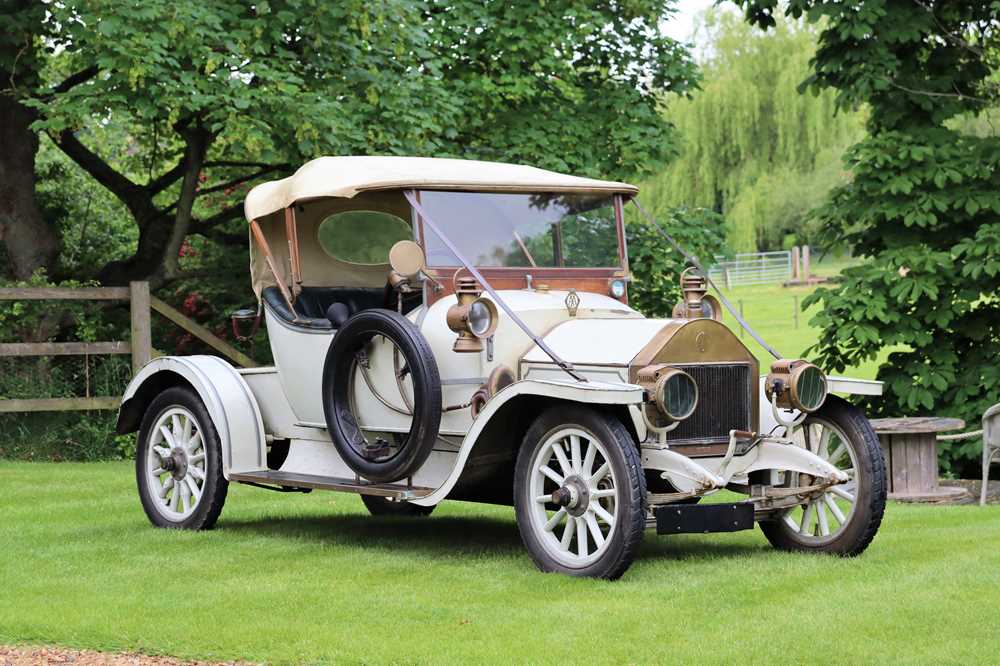 Alexandre Darracq made a fortune in the bicycle industry's boom years (the late 19th Century) before, like many of his contemporaries, turning his attention to motorised transport. After two false starts, Darracq launched his first successful internal combustion-engined automobile in 1900. That initial 6½hp single-cylinder voiturette was followed by a range of twins and fours, and the marque soon established a reputation for sporting prowess. The 10hp Darracq was powered by a four-cylinder engine with a high-tension Bosch magneto. With the French and British authorities having different horsepower ratings for a given engine size, the 10hp Darracq equates to circa 11.5hp in British R.A.C ratings. A three-speed manual transmission is operated via a leather-faced cone design clutch with stopping provided by rear drum brakes.

Manufactured in 1912, the Type L12 Tourer offered was supplied new to a Richard R. Black Esq. of Peterborough, who retained the Darracq until 1917 when it was acquired by the vendor’s great grandfather. A purchase receipt dated 20th September 1917 for the sum of £180 is present in the history file, with the Darracq remaining in the current family ownership ever since (across three individuals and four generations). Amazingly, the Tourer has spent its entire 110 year existence in the Peterborough area. Featuring a Torpedo two-seater body-style with hood, screen, acetylene head lamps, oil lamps and horn all included for the £225 new purchase price, the L12 also sports beaded-edge wheels, a Stepney spare, original tool-kit and functional starting handle.

One of just three thought to survive today, the Type L12 resided in a farmyard building for a number of years in the 1960s, before benefitting from a comprehensive restoration in the 1970s (across a three-year period), being local newspaper featured on completion. Accompanied by an RF60 ‘buff’ logbook issued on the 16th January 1925 in Soke of Peterborough; period photographs from different stages of its life; the previously mentioned 1917 purchase receipt; copies of invoices for work completed through the 1920s and copies of advertisements. Previous MOTs and copies of logbooks are further documented, and a quantity of spare engine parts are also offered with the car. Suited to many V.C.C and V.S.C.C events, this is an exceptionally rare survivor with magnificent history.