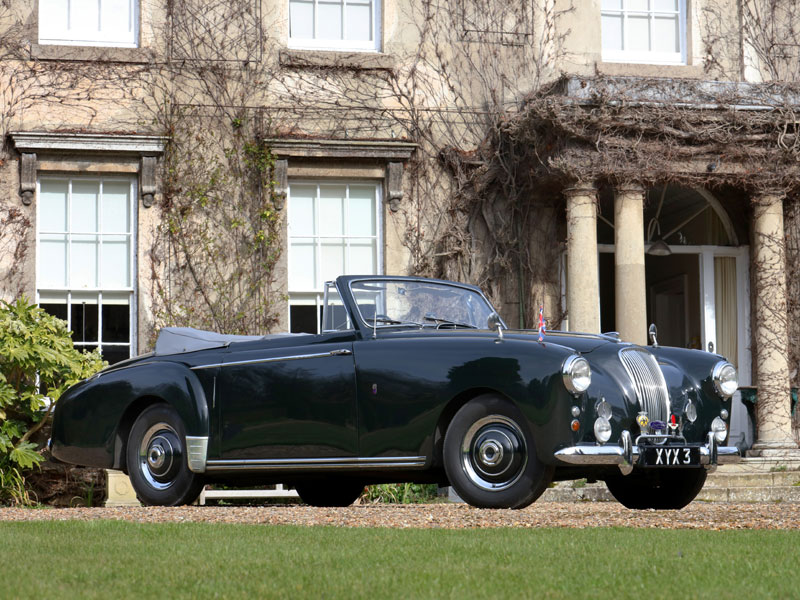 - Built to the special order of HRH, Prince Philip, The Duke of Edinburgh

- 1 of just 20 MK1 examples made but fitted with a power hood and floor-change gearbox (modifications that were standardised on the MK2) not to mention a pioneering radio telephone and extra vanity mirror for HM, The Queen

Faced with the need for a full four-seater so that he could transport members of his family as well as any attendant security detail but wanting something sporting, exclusive and British, HRH The Duke of Edinburgh opted for a Lagonda 3 Litre Drophead Coupe. An avid motorist who as Lieutenant Philip Mountbatten had held the unofficial record among his fellow naval officers for the 98-mile run from Bath to London, he doubtless approved of the Lagonda's all-round independent suspension, rack and pinion steering, full-synchromesh gearbox, svelte Frank Feeley styling and race proven DOHC straight-six engine. Capable of over 100mph and one of just 20 MKI examples made, the Duke's car boasted a number of personalised features including its Edinburgh Green livery, hydraulically-operated hood, bespoke dashboard / door cappings (covered in Dark Green leather) and radio telephone. The latter allowed him to speak directly to Buckingham Palace via a unique Admiralty frequency and Pye relay station up on the Hampstead hills. A technology buff, HRH obviously enjoyed his new 'toy' as the Daily Sketch told its readers: 'The Duke takes a keen delight in making surprise calls to the Queen . . . Sometimes he disguises his voice when speaking to Charles and Anne'.

Very much a personal car, the 3 Litre Drophead Coupe was used by HRH to go to polo matches at Cowdray Park, drop Prince Charles off at Cheam prep school, commute between Buckingham Palace and Windsor Castle and most likely attend meetings of the Thursday Club (a private dining club which met at Wheeler's restaurant in Soho and whose fellow members comprised Baron Nahum, David Niven, Peter Ustinov, Francis Bacon and Lucien Freud amongst others). The Lagonda also undertook its fair share of official duties (hence the pennant mount in its nearside front wing) with trips as far apart as Aberdeen, Scotland and Melbourne, Australia. Taken to the Antipodes as part of the Duke of Edinburgh's 1956-1957 Tour of the Commonwealth, the 3 Litre Drophead Coupe was piloted by both HRH and his chauffeur Walter Bennett during the 1956 Melbourne Olympics. An unintentional overshoot on one occasion prompting The Herald newspaper to run the knowing headline: 'Duke goes too far . . . and finds himself one of the crowd'. Interestingly, the four-seater's arrival Down Under had been presaged by an article entitled 'It's on way here - Glamour Car for Duke' which referred to it as his 'favourite' and noted: 'An enthusiastic motorist, the sporting Duke is bringing out an equally sporting car which was specially handbuilt'. Indeed, the Lagonda was allocated its own '101' number plate and pennant for the Olympics (both of which the vendor has procured but is minded to hang on to for sentimental reasons).

According to its accompanying copy Build Sheet and Service Records (the former recording HRH, The Duke of Edinburgh as the purchaser), chassis LB/290/31 was treated to sometimes weekly maintenance by the factory with engineers being dispatched to the Royal Mews and Windsor Castle. As well as tailoring the pedals to the Duke's preferences, converting the gearchange to a centre floor shift and installing the radio telephone, the records note the fitting of an additional mirror to the nearside. This mirror is rumoured to have been used by HM The Queen to adjust her hats and remains in situ today (whereas the radio telephone was removed when the Duke sold the car presumably to prevent any unwanted calls to the Palace). Keen that the 3 Litre Drophead Coupe should (a) never fail to proceed and (b) look its best in public its manufacturer was only too eager to remedy any cosmetic blemishes or mechanical maladies. Already familiar with the four-seater, Aston Martin Lagonda dispatched its chief service engineer Tony Tocock to look after the four-seater for the duration of its Australian sojourn, while Dunlop wrote to the Royal Mews to assure them that its Antipodean stockists would all carry a set of correct tyres for the car. Aston Martin Lagonda were subsequently granted a Royal Warrant of Appointment to HRH, The Duke of Edinburgh, while his example inspired purchases from the likes of King Baudouin of Belgium, King Hussein of Jordan and Prince Bertil of Sweden.

Employed by Prince Philip for numerous domestic engagements such as giving talks to the Automobile Association (of which he was President), lectures at various universities and even to open the unrestricted M1 motorway in 1959, taking the wheel of the Lagonda also allowed him to interact with the public in a less formal manner. For instance in 'The Aylesbury Duck' by James Goodwin the author, a traffic policeman, recalls how: 'On one occasion I noticed that the constables from Hyde Park Station were busy just inside the gates of the park . . . I held up my right arm and stopped the Park Lane traffic. When it had stopped I then turned ninety degrees to see to the stationary traffic, only to realise that the green Lagonda I had been holding up for all of three minutes contained people that I immediately recognised; Her Majesty The Queen sitting next to HRH Prince Philip, who was driving the car with its roof down. They were on their way from Windsor to Buckingham Castle and they were both laughing so I don't think they were too displeased. Their presence made me understand all the activity in the park!'

Similarly, Tim Heald's book 'The Duke: Portrait of Prince Philip' contains the following Lagonda-related anecdote: 'The popular image of the Duke of Edinburgh is one of almost unrelieved tough masculinity yet time and again, as I met those who knew him, I would be told stories about his kindness and concern. As a young equerry back in the 1950s, John Severne misread the day's schedule and let through a typing error which made nonsense of the timings. Early that morning the Duke's voice came blasting down the intercom.
'How on earth do you suppose we're going to get from the Palace to Herstmonceux in an hour?'
'I . . . er . . . oh . . . sorry, sir'.
'Quick get my car out. And warn the Royal Observatory that we're going to be late'.
'Yes sir'
The Duke took the wheel of his Lagonda and drove fast to Sussex. He likes to drive fast as everyone who has ever been driven by him will testify, but despite a speedy journey they were still behind schedule when they finally arrived. As they got out and approached the waiting reception line the Duke half turned to his shamefaced equerry and said 'If anyone asks why we're late, tell them it's my fault'.

Concerns about HRH's heavy right foot prompted Walter Bennett to tell journalists that while his employer liked to 'step on it', he was no 'speed merchant'. Nevertheless after some seven years and 35,000 miles of service, the Duke chose to replace the Lagonda with an Alvis TD21 Drophead Coupe. News of the change prompted Mr Alfred Rogers of Newmarket to write to the Palace asking if he could purchase the 3 Litre Drophead Coupe. Shying away from the prospect of a direct sale, James Orr - Prince Philip's then private secretary - sent a couple of elusive replies. Meanwhile, the four-seater was re-registered from 'OXR 1' to 'XYX 3' and disposed of via Car Mart Sales Ltd (another DoE warrant holder) to Machine Tool Sales (London) Ltd. Undeterred Mr Rogers tracked the car down and became its second private keeper in January 1962. Some fifteen years later he approached Aston Martin Lagonda to see whether they could recommend a potential purchaser. Conscious of the important Lagondas that the vendor owned, the factory recommended him as a worthy custodian. Entering the current ownership in 1977, the 3 Litre Drophead Coupe has been looked after by David Wall of Toad Hall Workshops, Wroxham for the past thirty-nine years. A switch on the dashboard and aerial are all that remains of the radio telephone system but the Queen's reputed vanity mirror remains in situ as does the original steering wheel, gearknob, panels and almost all the original Grey leather upholstery. In addition to a bodywork restoration and repaint in its correct shade of Edinburgh Green undertaken during 1990, the Lagonda was treated to a thorough engine overhaul by marque specialist Oselli, back axle refurbishment and the fitment of overdrive some ten years ago. Part of a significant private collection for nigh-on four decades, this singularly historic 3 Litre Drophead Coupe has recently been serviced and is thus said to be 'on the button'. Displaying a credible 47,400 miles (so perhaps 57,000 allowing for an odometer change in its early life), 'XYX 3' comes with the aforementioned copy factory build sheet and service records citing HRH, The Duke of Edinburgh as its purchaser plus a wealth of fascinating documentation (copy newspaper articles, book extracts, James Orr letters, continuation buff logbook, Oselli engine overhaul invoices etc)

Watch our promotional video at the following link:
https://www.youtube.com/watch?v=q0mD46EBcls
Share: