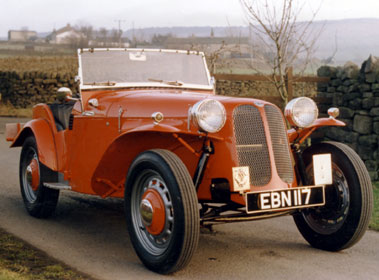 Founded in 1946 by Ken Delingpole and Ron Lowe, the company that bore a partial amalgam of their surnames began life as a competition car preparation specialist with a sideline as agents to both Wade-Ventor superchargers and the HRG marque. Operating from premises in Alvechurch, near Birmingham, the duo took their first tentative steps as manufacturers in 1947 when they began building replicas of Ron Lowe's famous Austin 7-based trials special, 'The Flipper'. Announced in January 1950, the Dellow MKI marked a switch to series production. Built from reclaimed ex-WD UP3 Chromium Molybdenum rocket casings, the new model's A-frame chassis retained Austin 7-esque transverse-leaf front and quarter-elliptic rear suspension. Equipped with Ford E93A running gear (1172cc engine, three-speed gearbox, axles etc), it was clothed in a neat aluminium body by Radpanels of Kidderminster. A mud plugger par excellence, the MKI was nevertheless capable of everyday use. Distinguished by its external two-way handbrake (forward for the front wheels, back for the rears), high bonnet profile and bulbous rear wings, it remained in production until May 1951 by which time ninety-four cars are thought to have been made.

Finished in red with black weather-resistant vinyl upholstery, this particular example is described by the vendor as being in "very good" condition with regard to its engine, gearbox, electrical equipment, interior trim, bodywork and paintwork. Reportedly supplied new to Bill Holt, 'EBN 117' soon established a formidable record of rallying / trials success during the 1950s. A North of England resident for most of its life and well-known to the marque register, the MKI is understood to have been extensively overhauled by David Winstanley in 1997 at a cost of over £16,000. Boasting such period-correct goodies as an Aquaplane cylinder head and inlet manifold (the latter complete with twin SU carburettors), the Bolton-registered two-seater also sports twin rear-mounted spare wheels and a stainless steel exhaust. Said to have been treated to £1,000 worth of more recent work so as to put it in "first class road condition", this historic sportscar is offered for sale with current MOT certificate.
Share: