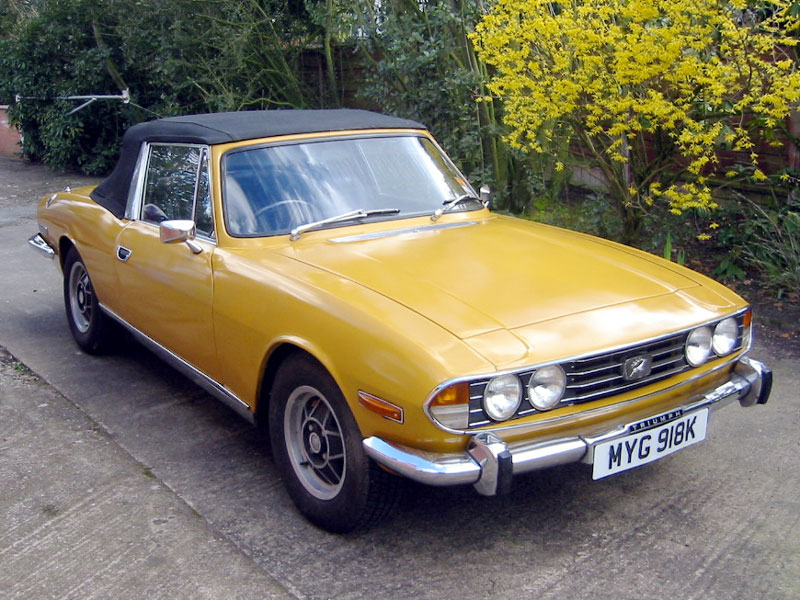 The British-built Stag was designed to compete with the established SL models from Mercedes-Benz. Like the Triumph 2000 it was developed from, it was styled by Italian maestro Giovanni Michelotti and featured the monocoque construction, fully independent suspension, disc/drum brakes, power-assisted rack and pinion steering and driveline of that Saloon. The powerplant, however, was an all new OHC V8 of 2997cc capacity, fed by a pair of Zenith Stromberg carburettors. The Stag received a warm reception at the time of launch in 1970. However, views on the model quickly soured once it fell into the hands of customers. There were quibbles over build quality, but the main problems concerned the camshaft drive chains, cylinder heads, cylinder head gaskets, water pumps and waterways of the new V8 engine. Many owners resorted to removing the powerplants altogether - replacing them with the ubiquitous Rover V8, Ford's Essex V6 unit or Triumph's own proven six-cylinder engine. Needless to say cars that were modified in this way are now considered less desirable than the ones that remained unmolested. Moreover, as the years have gone by, restorers have solved the V8's problems. Had Triumph themselves managed to do so, not only would the engine have found its way into other of the company's models, but the Stag range would surely have lived a longer, more successful life. As it was, production ceased in 1977 after some 25,877 examples had been made - some 9,000 of which have survived in the UK.

The right-hand drive MKI Stag being sold was produced on the 23rd of December 1971. It sports Yellow coachwork complemented by a Black interior. The majority of Stags were fitted with Borg Warner three-speed transmission, but 'MYG 918K' is equipped with the rarer four-speed manual unit, plus highly desirable Laycock overdrive that operates on both third and top gear. The vendor purchased the Triumph in June 2006 from a Mark Elmes of Kidderminster. He currently regards the engine (which is the original unit fitted to the car), manual transmission and overdrive, coachwork and paintwork to be "good" and the interior trim to be "fair". The Stag is MOT'd into August and taxed until the end of the year.
Share: