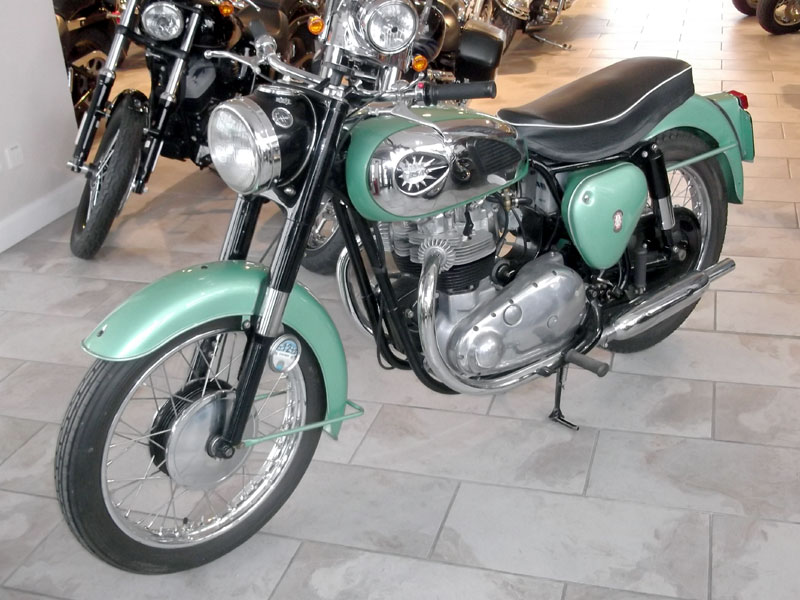 BSA introduced their response to the Speed Twin in 1946, with the machine changing little until October 1949 when two new, revised models were announced. The new 650cc Golden Flash was soon joined by the A7 500cc using the revised engine design. As with the previous model both rigid and plunger equipped frames were offered. The range continued in this form until 1954 when a new all welded frame design with pivoted fork rear suspension was introduced. For 1955 the sporting 500 adopted the "Shooting Star" name and adopted an Amal Monobloc. When tested the Shooting Star proved to be capable of 93 mph and could cover the standing quarter mile in 16 seconds thanks to a claimed power output of 32 bhp. The Shooting Star ran on with only detail changes until 1962, the most significant occurring in 1958 when the brakes were revised with cast iron drums being adopted and the front increasing in diameter to 8 inches. The pivoted fork Shooting Star is now regarded by many as one of the finer variants of the pre unit A series twins offering good performance in a smooth manner.
This example dating from 1960 is described as having an engine and transmission that are in "good" order with "excellent" cycle parts. Restored during 2010 the machine is presented in cosmetically "as new" condition and is offered with a Swansea V5C and an MOT certificate valid until the 21st December 2012.