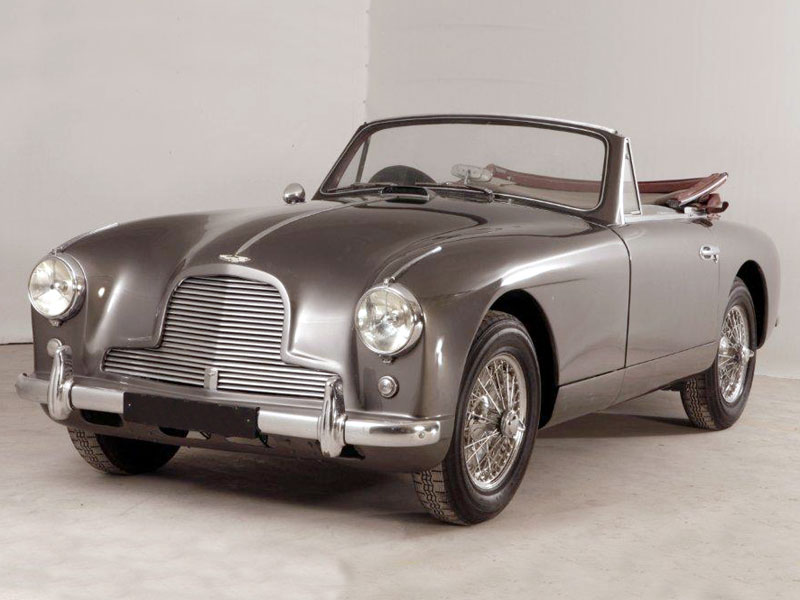 1947 was the year that the floundering British marques of Aston Martin and Lagonda were both saved from oblivion by wealthy Yorkshire industrialist David Brown, who bought and combined them to create Aston Martin Lagonda. The first product of the marriage was the 2-litre Sports of which only 13 examples plus a chassis were produced. Retrospectively dubbed the DB1, the model nevertheless laid the foundation of an aspirational line of cars that continues to this day. It was the DB2 that really set the scene, however. First seen in prototype form at Le Mans in 1949, the newcomer was officially launched at the New York Motor Show of April 1950. It then shot to prominence a mere two months later when, with three cars hastily snatched from the production line, the Works team finished first and second in class at Le Mans and won the Index of Performance. As a result of this magnificent achievement, demand greatly outweighed supply for some time to come.

Next came the DB2/4 that was introduced to the public at the 1953 London Motor Show. Its significant developments were: the addition of a small rear seat that turned the car into a 2+2; the raised roofline to provide extra headroom for rear seat passengers and the curved, single-piece windscreen. Far more momentous, though, was the Aston's opening tailgate which we now appreciate made the DB2/4 the world's first 'hatchback'. As with the DB2, the whole front body section hinged forward to provide access to the engine and front suspension, which was independent by coil springs and trailing links; that at the rear comprised a live axle with parallel radius arms and coil springs. Braking was by 12-inch Girling drum units all round. Inherited from the DB2 Vantage, the newcomer's straight-six DOHC 2580cc 'VB6E' engine had been designed by Willie Watson (under the watchful eye of no less a master than W. O. Bentley) and acquired by David Brown as part of the Lagonda package. Within a year this high performance unit had been enlarged to 2922cc. Christened 'VB6J', the revised powerplant was credited with developing some 140bhp and 178lbft - outputs sufficient for a 0-60mph time of 10.5 seconds and a top speed of a whisker under 120mph. Sidelined from sports racing duties by the DB3 programme, Works entered DB2/4 MKIs nevertheless contested the 1955 Monte Carlo Rally and Mille Miglia (their efforts on the former event netting the Team Prize). Of the 562 DB2/4 MKIs made, just 56 were 'home market' Drophead Coupes. Priced at £2,910 when new, Aston's handbuilt soft-top was almost twice as expensive as the contemporaneous Jaguar XK140 Drophead Coupe.

It was in 1972 that chassis number LML1064 was acquired by John Henry Horne Esq. of Ambleside, who seems to have retained an interest in it for no less than 29 years, even though the DB2/4 MKI was re-registered to a Mrs Vera Casket of Troutbeck, Cumbria in 1995. That he was still driving it in 1998 is confirmed by an article featured in the Summer 1998 issue of AM Magazine, where he recalled a club jaunt through the Lake District the previous August, when the exhaust parted company with the car and he and Mrs Casket had to hitch a ride in a vintage Lagonda. The vendor purchased the Drophead Coupe during March 2001 from a Coys auction in Islington, whereupon it became a member of a sizeable continental car collection. He informs us that the Aston has subsequently enjoyed a careful programme of preservation that recently included a compete repaint (the chosen hue mimicking Moonbeam Grey). He believes the leather interior is, however, original and currently considers the alloy bodywork, six-cylinder engine and four-speed manual gearbox to all be in "very good" order.

From the Aston's factory and other records we understand: it was fitted with Alfin brake drums in May 1957, the gearbox was overhauled by Aston Martin in February 1960, the speedometer replaced at an indicated 96,115 miles in July 1976, the chrome wire wheels refurbished in 1995 and a news stainless steel exhaust fitted in 1998. The car boasts matching chassis and engine numbers and is now being sold complete with a copy of the original buff log book, and a copy of the aforementioned article and factory records. A rare and highly desirable example of the David Brown era of Aston Martins.

PLEASE NOTE: According to HPi, the UK registration number 'OSL 386' is still associated with this Aston Martin. However, it has formed part of a European collection for the last several years and as such does not possess a current V5C registration document.
Share: