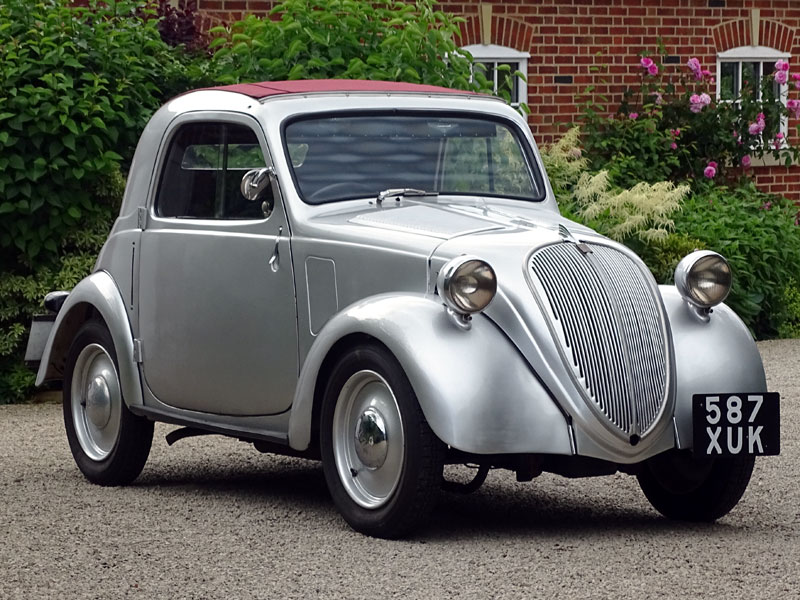 A design classic, the original Fiat 500 (nicknamed the 'Topolino' or Little Mouse) was engineered by Dante Giacosa and Antonio Fessia. Powered by a 569cc engine allied to synchromesh transmission, it boasted a 55mph top speed and 45mpg fuel consumption! First registered by Manchester County Council on April 13th 1937, this delightful right-hand drive Topolino migrated to Devon some twenty years later (or so a handwritten annotation to its accompanying green continuation logbook suggests). Belonging to Anthony Turreff and Patrick Hardy during the 1960s, the Fiat was then laid-up for a time before John Evans of Paignton re-registered it with the DVLA during 1983. Nearing the end of an extensive restoration when Mr Evans died in 2001, chassis 013080 was purchased by Chris Jackson who commissioned marque specialist Steve Denning to make it roadworthy again. During his seven-year stewardship Mr Jackson treated the Topolino to a respray (2002), re-trim in Black leather (2003) plus carburettor and gearbox refurbishments (2007). He also had attention paid to its wiring, dynamo and starter motor and fitted new tyres etc. Further fettled by next keeper David Devonald of Warrington, the Fiat entered the current ownership via our July 2008 Buxton auction at a cost of £11,733.75. Potentially eligible for the highly prestigious Mille Miglia Storica, the Fiat was hotly contested with the vendor outbidding a Japanese enthusiast for the privilege of adding it to his collection. Stabled alongside various Bugattis and a W.O. Bentley for the last nine years, '587 XUK' has been sparingly used. Benefiting from a reconditioned steering box, more recent work has included a partial engine refresh (new cylinder head gasket, bores honed, fresh piston rings) and freeing of the brakes. Pleasingly understood to retain its original engine, this lovely UK-supplied Topolino is offered for sale with V5C Registration Document and history file.

PLEASE NOTE: This lot includes a quantity of Topolino spares (photos of which are in the Documents Office). The spares can be collected from near Birmingham Airport within a reasonable timeframe after the sale.
Share: