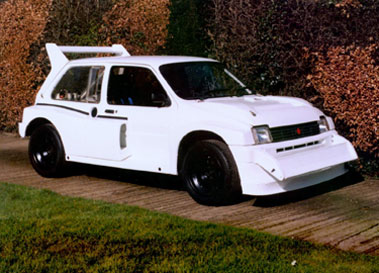 Much of the design and engineering work for the 1984-launched, MG-badged Metro 4-wheel drive rally car was carried out for Austin-Rover by Patrick Head of Williams at Didcot with V6-cylinder engine development overseen by David Wood from the Competitions Department at Abingdon. The resultant 6R4 went on to be a frequent winner on stage rallies and in rallycross.
First registered in September 1987, this 6R4 came from the only 200 or so batch of four-wheeldrive cars, homologation specials, that were specially produced at Longbridge to qualify for FIA Group B and, hopefully, provide works drivers Tony Pond, Malcolm Wilson and David Llewellyn with a competitive car in the World Rally Championship. Pond did eventually drive a 6R4 to third place overall on an RAC Rally, which was the car's best WRC performance before the Group B category was banned from international competition.
However, unlike most of the 6R4s, which were lower specification Clubman versions with less powerful 2.8-litre 240bhp engines, E50 MMM is a rare and much more desirable International 3-litre model, which was driven by first owner Terry Hutton in an all-6R4 support race during the 1988 Birmingham Superprix meeting.
After its period competition career in 1991, this, the 171st 6R4 was treated to a full restoration including a new standard steel bodyshell (with engine carrying frame built into the rear end, entirely different to a standard Metro shell). The International equipment was faithfully transferred including power steering and works rally team spec engine with phase 2 big-valve cylinder heads and correct fuel injection with large throttle butterflies boosting power output to 420bhp.
Following purchase by the previous owner in 1995, model specialist Julian Godfrey carried out a full mechanical overhaul which included rebuilding both differentials and the motor, which, post-rebuild, did register the intended 420bhp on the dynamometer. It is claimed that all the mechanical components have done only a very few miles since, although whilst in the current private collection, the V6 has been run regularly. Very recent maintenance has included full service, renewal of camshafts drive belting, overhauling of braking system and fitment of new exhaust system with repackable silencers in stainless steel.
This is a rare opportunity to acquire the much more desirable and collectable 3-litre works-spec 6R4 with correct `dog' gearbox, plated diffs, tarmac as well as forest wheels and, unusually, both period and continuous history. Current mechanical and cosmetic condition is described as excellent.
Whether you want to preserve the car as is - and maybe exercise it on the occasional track day - or have more serious ambitions to be invited to join the Kleins `Slowly Sideways' pack of Group Bs which entertain rally crowds before major events, this extraordinary package is potentially the quickest set of street legal wheels for getting from A to B.
Alternatively, although some purists might disapprove of vandalising such a sound and unabused 6R4, this would also make a very sound donor car for conversion into a modern tarmac event winner. A 1980s 6R4, admittedly in John Price's capable hands, has seen off far more recent ex-WRC cars to win the UK national series in nine out of the last ten years. It would be a shame, perhaps, to have to change the gloriously potent International engine in this car for one with the no more than 2.5-litre capacity and 300bhp maximum power permitted by modern stage rally vehicle regs.
PLEASE NOTE: This exceptional vehicle has the benefit of the syncromesh gearbox fitted, and not the dog box, which makes it far easier to drive and it comes with a lovely history which should be viewed prior to the sale which includes a rare original sales brochure. Please be aware there is a master switch on the dashboard and it comes with the full set of four spare wheels.
Please Also Note: The word 'works' has been changed to 'standard steel' in the context of new works (standard steel) bodyshell in paragraph 4 and the car dos not have Acropolis suspension which is rare and water cooled or Corsica brakes.