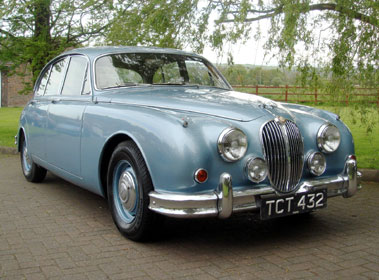 Jaguar's beautiful new 2.4-litre of 1956 introduced a new breed to British roads - the luxury small saloon. It was updated into the still elegant but more muscular MkII in 1959, improvements including a larger glass area thanks to slimmer pillars not to mention a better dashboard and increased ventilation. There was also the option of the 3781cc, 220bhp version of the high, mighty and handsome XK twin-cam six, in which case the MkII became a 125mph car: warp speed in 1961. Disc brakes all round had arrived with the 3.4-litre version in 1957. And while the 3.8 was the obvious choice for the 1960s speed freak, the police liked them too. Production continued up to 1968, by which time just over 91,000 had been built including the last 240 and 340 versions.

This particular automatic 3.8 litre example is accompanied by various old MOT certificates dating back to 1969 which the vendor believes go some way towards proving that its total mileage from new has yet to reach 41,000, with only a handful of miles covered each year from 1990. The same documentation also seemingly confirms that the Jaguar has covered only 3,400 miles in the past 34 years. The 'P' prefix to the chassis number shows that it was fitted with power steering by the factory. The vendor informs us that: "The underbody is highly original and reminiscent of a Jaguar two years old: heavy original 3M undersealing has protected its bodywork". He further relates that "the engine runs extremely well with good oil pressure", and, following years of dry storage, "the brakes have been renewed with new discs, calipers, pads and pipes. A new stainless steel exhaust and five new tyres have been fitted too". 'TCT 432' is "now a truly exceptional 3.8 Jaguar that represents an excellent investment, and will hopefully give its new owner many years of trouble-free classic car motoring", he concludes.