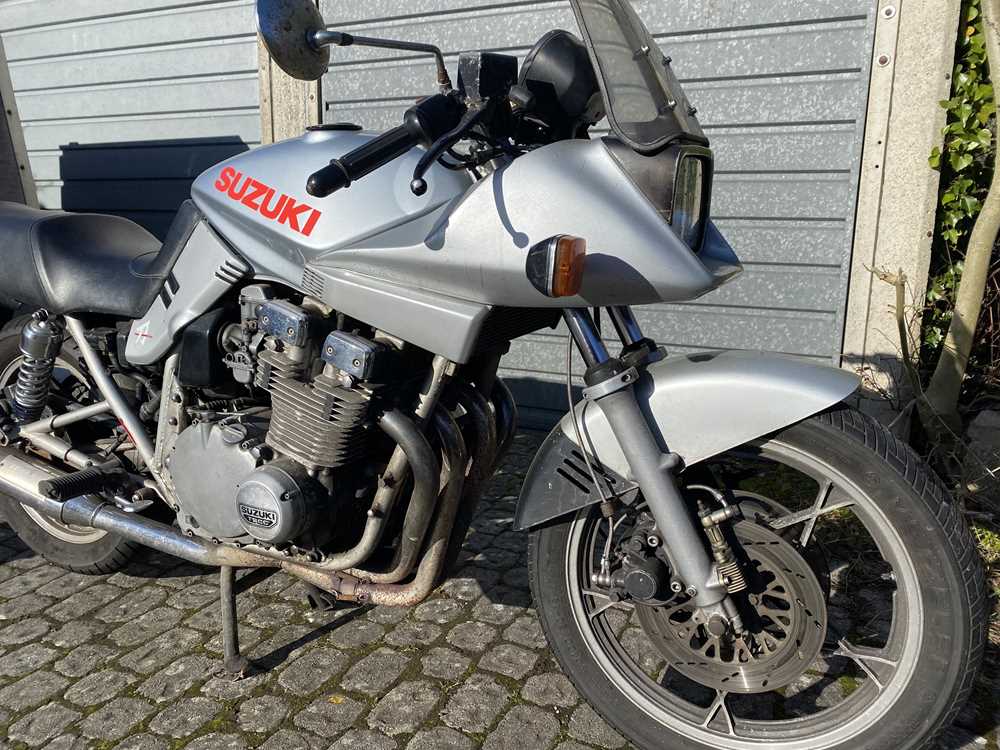 The Suzuki Motor Co. was established in 1909 by Michio Suzuki to produce machinery for the cotton industry. An initial diversification into 4 wheeled transport was curtailed by WW2 but after the war Japan had a need for cheap reliable transport so Suzuki, like a lot of others around the world, began to produce clip-on engines for pushbikes. These proved to be an immediate success and soon they were making full motorcycles and by the early '60s were second only to Honda in numbers of two-wheelers manufactured. In the early 1980s Suzuki commissioned Hans Muth of Target Design in Germany to design a radical new look to break the mold of motorcycle design, the result being the distinctive Katana shape named and styled after a Japanese sword. Muth added the Japanese character for the Katana sword interleaved with a red image of the same sword saying “The sword first serves as a weapon, but a Katana also has a mythological meaning in Japan” and when he presented the design to Osamu Suzuki “If you don’t treat it right, its sharpness can be lethal. The same is true for a motorcycle.”

The 1000cc version of the Katana was a limited edition model produced in sufficient numbers to homologate it for racing under various international superbike and production racing rules at the time. The GSX1000SZ had frame numbers beginning with GS10X-500001 and were fitted by the factory with a performance inlet camshaft paired with the same exhaust camshaft as the standard GSX1100SZ together with a set of Mikuni VM32SS slide carburetors. This example is frame number GS100X005000085 so must be a very early one off the production line in1981. Bought by the vendor in 1990 and in use up until 2019 when it was serviced and fitted with new brake pads and a chain and sprocket set. Supplied with a current V5C.

TRANSPORT
Shippio will be onsite to assist with all of your transport requirements.