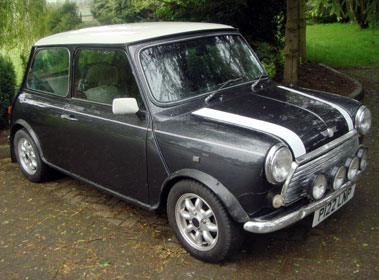 The Mini celebrates its 50th birthday this year. Alec Issigonis' purest design redefined the small car, this masterpiece of packaging making best use of its tiny - just over 10ft - length to seat four. In production for 41 years, more than 5 million were built, and the most special were the Coopers, named after their creator John Cooper, the race car driver and builder who was captivated by the little car's sharp, chuckable handling. Frustrated by the lack of go from the standard 34bhp, 848cc engine, Cooper used tuning experience gained from his BMC-motored Formula Junior cars, and his versions were soon producing a far more useful 55bhp: a new breed of car - the Mini-Cooper - had been born. From 1961, the factory offered the hotted-up Cooper as a regular production model, with the still more powerful Cooper 'S' available from 1963. By 1964, the Cooper 'S' had grown to its definitive 75bhp, 1275cc incarnation, driven by rock stars and royalty and becoming a world-beating rally car.

Cooper fans were unhappy when the model was dropped in 1971, but by September 1990 the Cooper was once again offered from the factory, though by now all Minis were rebranded Rover and rode on 12in wheels. The little car never stopped evolving, and in 1991 gained fuel injection and electronic ignition; in 1996 a driver's airbag was fitted in the steering wheel, along with the radiator being moved around to the front to help comply with noise regulations, and the last cars had twin-point fuel injection.
The single-point fuel-injected cars like this one produce 63bhp, giving 90mph and retain the Mini's brilliant, entertaining handling. This car, with traditional Cooper white roof, has original half-leather sports interior, Minilite-type wheels, plus a wooden dashboard and CD player. The vendor describes it as being in "very good" condition with regard to its engine, four-speed manual gearbox, electrical equipment, interior trim, bodywork and paintwork, adding that there is "a full service book showing 16 stamps to date".