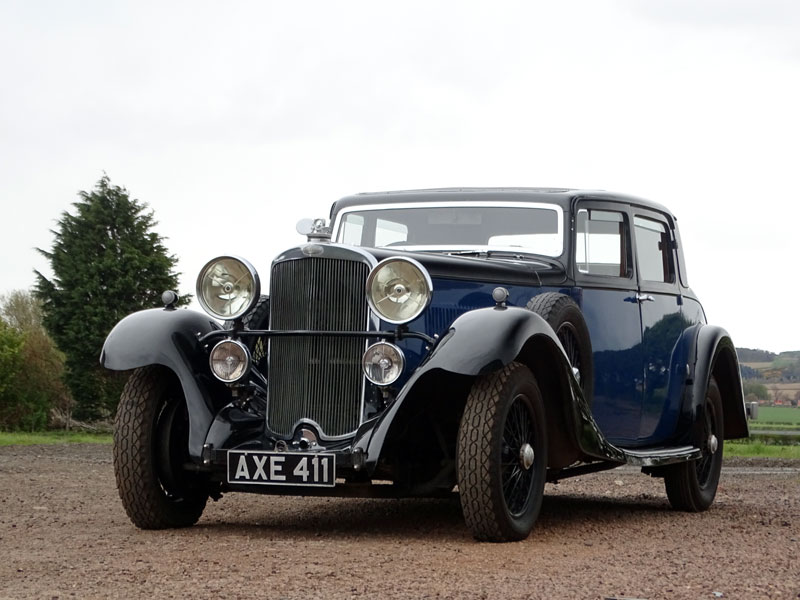 'This powerful 3.3 litre coupe was top of the Sunbeam range in 1933. Its lavish interior and low-line style singles it out as one of the great sports / touring cars of the 1930s. It is in good condition all round and ready to show or use. The Sunbeam 25 sports cars of the period vied with the Derby Bentleys and Alvis Speed 20s for prominence as the sporting gentleman's pride and joy. Relatively few 25s were made and this four-door pillarless coupe was the most expensive Sunbeam at the time with only one other known to still exist. Its history is well-documented with seven owners, generally in the South of England and latterly in Cambridge. It has covered less than 20,000 miles in the last forty-five years as evidenced from the MOT certificates.

The Sunbeam had only one owner from 1967 to 1995 and was used regularly during the late 1960s and 1970s and attended Sandhurst rallies over this period. Mileage on MOTs was not recorded during the 1960s, but in 1971 a mileage of 3,500 was recorded and the history suggests that the car had always been kept on the road and in regular use. We know the Sunbeam was on the road in 1975 as a tax disc is present, but it was soon after garaged as its enthusiast owner opted to use his 18.2 Sunbeam model instead. Sadly during the mid-1990s the long term owner passed away and the car was given to a specialist for appraisal. The Sunbeam at this point required a high level of work but retained lots of originality.

A new owner was found in 1995 and substantial work was then carried out. The engine was overhauled with new pistons, new big end bolts, refaced cylinder head, recut valve seats, refaced valves and various machining work was carried out. It was reported that white metal work had been done in 1965 and only several thousand miles had been covered since. The gearbox was inspected, the clutch relined and a higher ratio crown wheel and pinion fitted; ideal for longer distance touring. The electrical system was re-wired, brake system overhauled, steering overhauled and the suspension treated to new telescopic shock absorbers. The exhaust system was replaced and the starter motor and dynamo stripped, checked and overhauled. The bodywork was stripped down, floorboards and bulk head replaced and various frame work panels replaced or repaired. The Sunbeam was painted and various re-chroming work carried out. The interior was found totally original and treated to new carpets, new headlining and leather work carried out to the rear.

Between 1996 and 2004 the Sunbeam covered around 7,000 miles and then changed hands; between 2004 and 2011 another 6,000 miles were accrued. 'AXE 411' was then sold to its most recent owner who covered several thousand further miles and carried out the expensive engine work. The car is currently in good mechanical order and had the brakes overhauled and relined again recently. The bodywork has a deep mature shine and internally the leather and woodwork are outstanding. The sliding roof pulls back easily and the steering is surprisingly light once the car is moving at over a few miles per hour. It comes with good records of its more recent history, tools and a sales brochure. All in all it is a most imposing car of the period. Rare, valuable and highly collectable and something different from the usual crop of thirties Bentleys'.
Share: