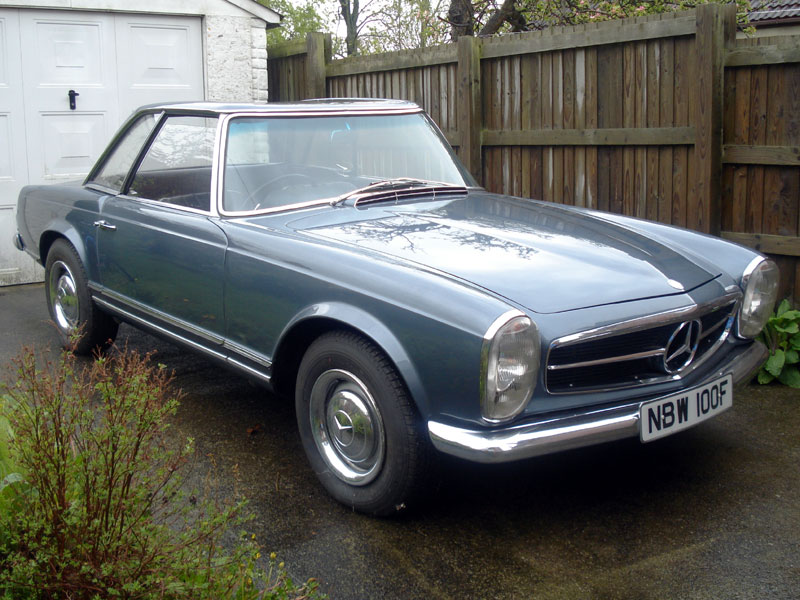 The rarest of the Mercedes-Benz 'Pagoda' (W113) models, the 250SL was introduced at the March 1967 Geneva Salon. Blessed with the same effortlessly elegant Paul Bracq styling as the outgoing 230SL, it was powered by a new, seven-bearing crankshaft, 2496cc SOHC straight-six engine that developed 150bhp and 159lbft of torque. The model remained in production for just a single year, accounting for a mere 5,196 sales worldwide.

This right-hand drive 1967 example is finished in Metallic Blue teamed with Blue leather upholstery and equipped with the optional automatic transmission. It was acquired by the present keeper's parents in 1982 and has been kept and stored in garages in York and Cowes on the Isle of Wight from then until now. Seven years ago it was reportedly treated to an extensive restoration by Pool Lane Classics of Kirk Hammerton, York which included: a thorough engine overhaul and unleaded fuel conversion, plus general body refurbishment and repaint from Silver to the original colour of Blue-Grey. The Benz has covered just 200 miles since the work was completed. The vendor currently regards the bodywork and engine as "very good", the paintwork as "good" and the gearbox and interior trim as "average". 'NBW 100F' comes complete with records and images of the restoration.

PLEASE NOTE: This vehicle has an MOT until April 2013.
Share: