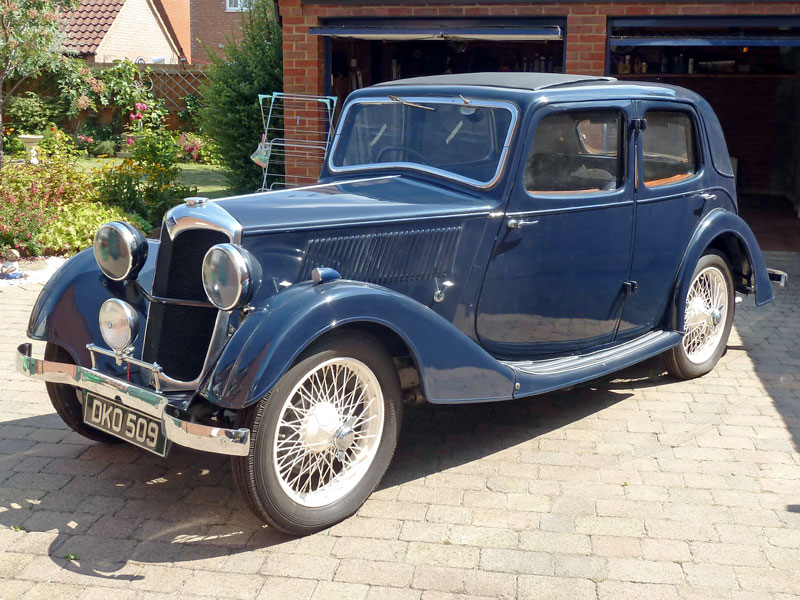 - Believed to have had only five recorded owners from new, and fitted with a pre-selector gearbox

The buff log book on file for this lovely pre-selector gearbox equipped Riley 9 Merlin states that it was first registered in Maidstone, Kent, on February 1st 1937 to a lady in Rainham, Kent. She is reported to have retained ownership until 1968 when it was acquired by a gentleman in Dorking, Surrey, who soon moved to Worthing, West Sussex. He still owned the car a year later but other than a copy of an August 1970 MOT certificate from his local garage in Worthing, the trail goes cold until early 2002 when it is apparent that the DVLA accepted a request from someone in Wadhurst, Kent, to have the car re-registered with its original number plate. There are photographs on file from around that period that show the car to be in remarkably sound and complete condition, indicating that its predicted thirty years of storage were in somewhere extremely dry. In 2003 the car is reported to have been in "running" order and ownership passed again to someone in Kent who is believed to have commenced the restoration. However, the Merlin was sold in 2009 as a part-completed project and was shortly afterwards acquired by our vendor. The sales description at the time stated that "The chassis, front and rear axles, suspension, prop-shaft, and engine have all been overhauled, while the body received new door skins and the ash frame-work has been repaired wherever necessary. Currently in primer, DKO 509 is now ready for final painting and re-trimming". Our vendor has since spent well in excess of £14,000 on restorative works which include having the car re-painted (in a colour as close to its original as possible), having the front seats re-trimmed, replacing the carpets, renovating the wood-work, re-chroming many items including the grille, and powder coating the wheels, invoices for all of which are on file. Reportedly last run about a year ago (hence the temporary dash board still fitted), the car comes with a few items to aid completion of the restoration such as headlight reflectors, headlining cloth, and a new wiring loom. Also present are numerous invoices from both the current and previous ownership and a quantity of photographs showing the body and mechanical renovations. This is a beautiful car which has clearly had significant recent expenditure, and is apparently not far away from returning to the road after about forty years.
Share: