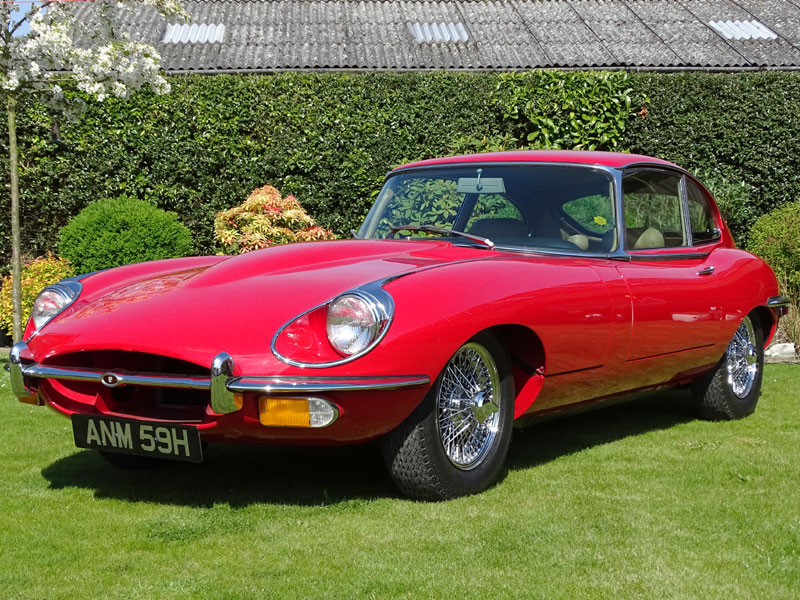 The E-Type's Malcolm Sayer-penned lines are thought by many to be among the most striking ever to adorn a motor car. Indeed, only a few years ago the Daily Telegraph ranked the E-Type top in a pole of the '100 most beautiful cars of all time'. The E-Type, or XK-E as it was known in the USA, made its debut at the 1961 Geneva Salon where its unique combination of grace and pace stole the show. From birth, the car was available as a Fixed Head Coupe or a two-seat Roadster. At launch the new Jaguar was the fastest production car of its time - its 3.8-litre straight six engine allowing a 0-60mph acceleration time of around seven seconds and a top speed of circa 150mph. Despite this, the engine size was increased from 3.8 to 4.2-litres in October 1964 and, with the change, came a sweeter all-synchromesh gearbox, better brakes and more comfortable seats. The Series 2 models introduced in 1969 are distinguished by their lack of headlamp covers, enlarged front air intake, repositioned front indicators and tail lights, wrap-around rear bumper, twin-electric fans, uprated brakes and refashioned facia and seats.

Dispatched from Browns lane on the 27th November 1969 to British Leyland, New York, USA, 'ANM 59H' is finished in Red matched to Biscuit interior and arrived back in the UK in 1985. It's understood at this stage it was converted to RHD and fitted with triple SU Carburettors followed by an extensive restoration in the late 1980's. Displaying a credible 90,300 miles and having just one former UK keeper, 'ANM 59H' is a previous Jaguar Drivers Club concours winner and is fitted with electronic ignition. Offered with every MOT certificate from 1985 onwards, collection of old tax discs, original handbook and Jaguar heritage certificate this much-loved example is described by the vendor to be 'very good' in regard to the engine, interior, paintwork, bodywork and gearbox and is offered with an MOT certificate into September 2017 with no-advisory's.
Share: