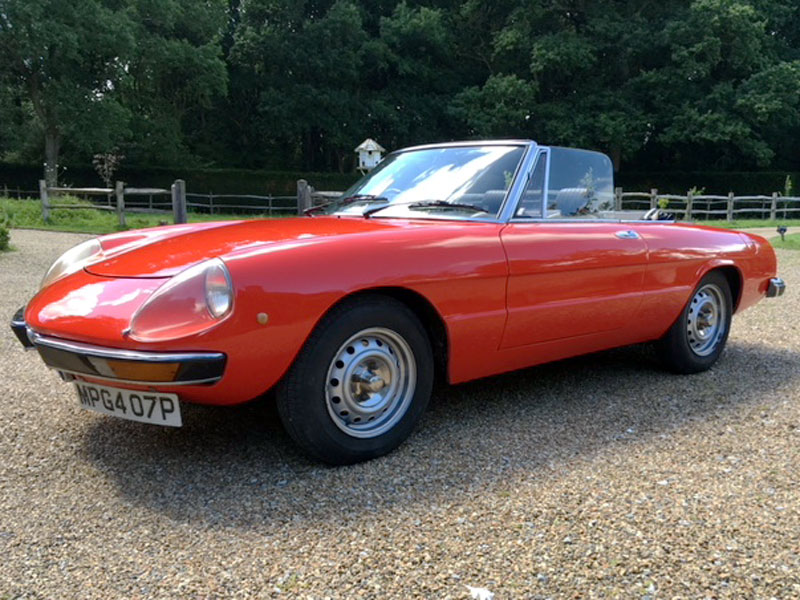 Introduced in 1970 the second series of Alfa Romeo's iconic Spider Veloce was visually distinguished by a subtly revised grille, more raked windscreen, fashionable cut-off 'Kamm Tail' and new door handles. Designed and built by Pininfarina, the newcomer's two-door monocoque bodyshell incorporated the same sophisticated independent front suspension, five-speed manual gearbox and four-wheel disc brakes as its 'Duetto' predecessor. Initially powered by a 1779cc version of Alfa Romeo's jewel-like four-cylinder 'twin-cam' engine, the second series cars were upgraded to 1962cc during 1971. With a quoted 132bhp and 134lbft on tap, the 2000 Spider Veloce was reputedly capable of over 120mph. Great fun to drive, the model evolved through third and fourth series remaining in production until 1993.

First encountering 'MPG 407P' when he sold it new whilst working at Bell & Colvill, the vendor was also responsible for supplying the Spider to a subsequent keeper before buying it back for his own use during 2000. Repainted shortly thereafter, the Alfa Romeo is warranted to have covered just 52,000 miles from new. Pleasingly retaining its original engine, 'MPG 407P' is described by the vendor as being in 'very good overall' condition. Offered for sale with V5C Registration Document, MOT certificate valid until June 2018 and history file (including Bell & Colvill paperwork).
Share: