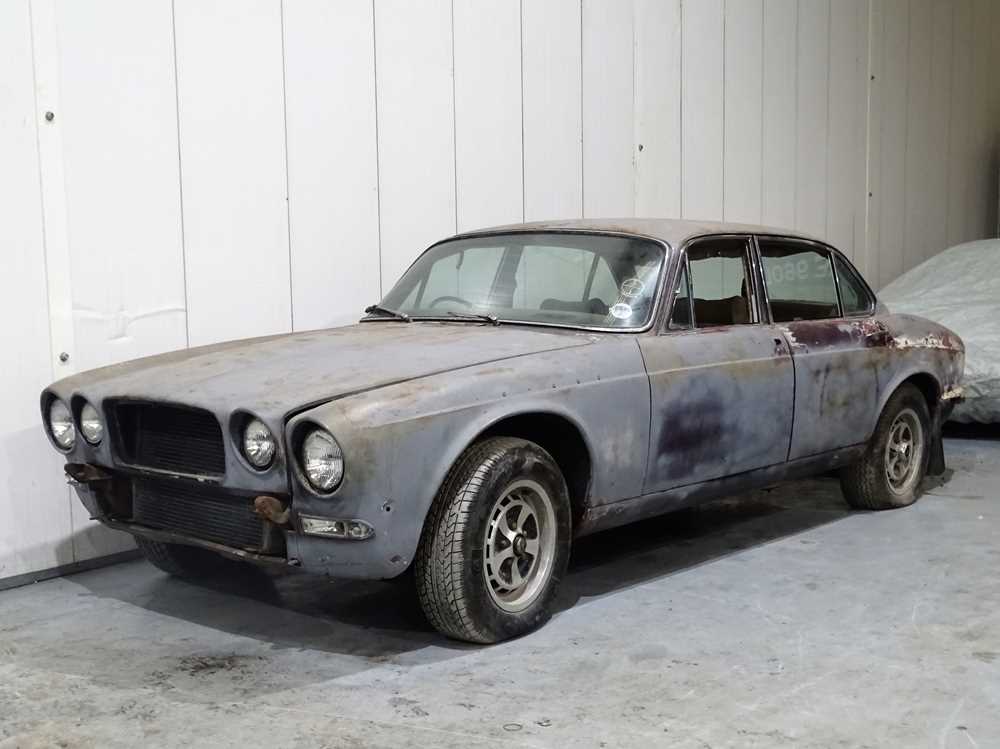 Once the pride of Browns Lane, this historic Daimler Double Six Vanden Plas LWB has the distinction of having been the very first RHD example made. According to Jaguar Heritage Trust records and the accompanying Heritage Certificate, chassis 2B1001BW was manufactured on 18th May 1972 and fitted with body number 5B1002. Originally finished in Garnet Metallic with Chamois interior, it was dispatched on 8th November 1972 and subsequently sold to its first owner, J Dale Ltd of London N1, via dealers Reeve & Stedeford of Birmingham. It was road registered under the mark ‘GON 51L’ on 1st February 1973. The story goes that chassis number 1 received body number 2 and vice versa, although this may require confirmation from Jaguar historians. Chassis number 2 was reputedly gifted to the Queen Mother at the time. Re-registered as 'VXE 960L' at some stage, the luxury saloon previously belonged to a Jaguar enthusiast before entering the current ownership circa six years ago and being stripped for a restoration that has yet to be completed. Pleasingly retaining its original factory-fitted 5.3 litre V12, the Daimler surely belongs in a marque collection or museum.

Introduced in 1968, the Jaguar XJ Series and its Daimler counterparts were the last saloons to enjoy the personal input of Jaguar's founder, Sir William Lyons. Some four years into production a 12-cylinder XJ was offered for the first time, the Daimler version of which was dubbed the Double-Six, thereby reviving the famous Daimler model name of the vintage era. Only 877 Series 1 Daimler Double Sixes were made between January 1972 and July 1973, a mere 337 of which were to right-hand drive, long wheelbase Vanden Plas specification.

Please Note: Further photographs of the parts which accompany the car will be added soon (door cards, chrome trim etc)