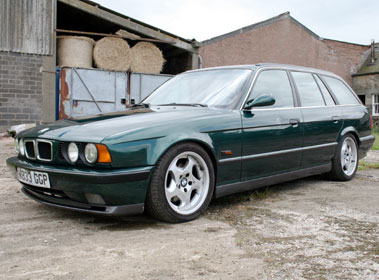 BMW's 'M' cars are now part of automotive folklore. The first model to wear the now famous badge was the M5 introduced at the 1984 Amsterdam Motor Show. It was based on the 535i chassis of the time (E28), handbuilt by the company's motorsport technicians and powered by an evolution of its M1 engine. Unsurprisingly, it instantly became the world's fastest production saloon. The second generation M5 followed the same pattern - it was handbuilt around the latest 535i chassis (E34) and initially powered by a tuned straight-six cylinder engine of 3.5-litres capacity producing 315bhp and 266lbft of torque. It featured firmly sprung independent suspension all-round and was readily distinguished by its unique wheels, purposeful looking exhaust tailpipes and the much-coveted 'M' badges. Late in 1991, engine displacement was increased to 3.8-litres, further raising the power output to 335bhp. The following year saw the introduction of Touring (estate) version. The small run of some 891 cars did not justify the development of a RHD version, but the British enthusiasm for BMW's 'M' cars ensured that a number of the LHD Tourings made their way to these shores.

The car on offer is just such an example. A 1994 model finished in green with black leather interior, it reportedly boasts "a CD changer/player, electric/heated seats, climate control, electric windows/mirrors and cruise control" as well as "lots of bills and some history". It is further understood to have recently benefited from "new springs and Bilstein dampers (the original self-levelling shock absorbers are included in the sale), a replacement clutch, rear tyres and radiator". The owner admits to some "small defects in the bodywork and paintwork" and some "tappet noise from the engine", but says the car has been "well maintained and drives well". It is MOT'd until April 2010 and has a valid tax disc. With its unique combination of load capacity and outstanding performance, the M5 Touring represented the quickest way of transporting passengers and their luggage across Europe when it burst into being in the '90s - a tradition continued by the E61 M5 Touring of today. Rare and quick even by current standards, there remains a firm following for those inaugural examples.