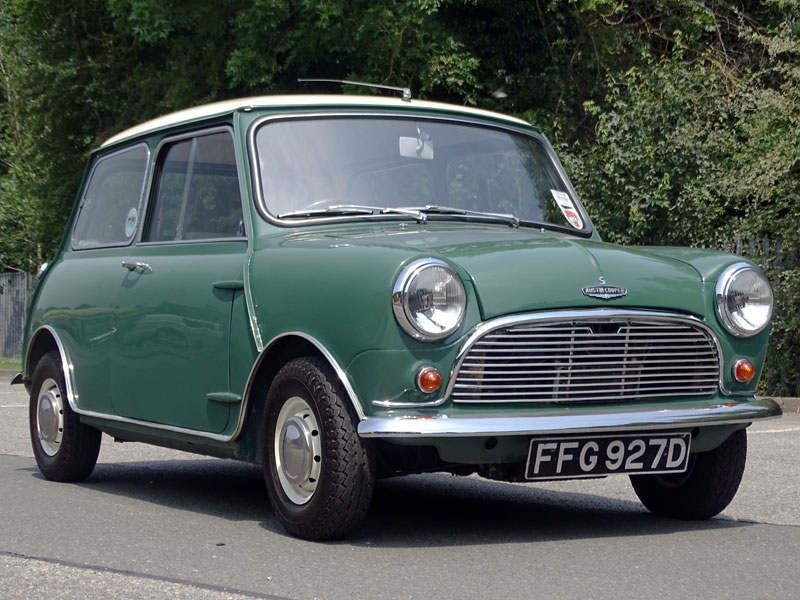 - A RHD, 'home market' 1275 Cooper S that was supplied new via Moir & Baxter of Edinburgh

The chance meeting between John Cooper and Aurelio Lampredi at the 1959 Italian GP is now an established part of Mini folklore. Having charmed a very early 850cc model out of BMC and driven it to Monza, Cooper was accosted by Fiat engineer (and ex-Ferrari F1 designer) Lampredi. Infected by his old enemy's enthusiasm, the Italian asked to borrow the new wonder car. Returning several hours later, he heralded it as the future of automotive design before adding "if it weren't so ugly, I'd shoot myself". Unperturbed Cooper continued to harass Issigonis and BMC until they agreed to build a 'hot' version. Initially conceived as a homologation special, the Mini Cooper was launched in July 1961. Powered by an enlarged 997cc engine and benefiting from front disc brakes, it gave way to a succession of ever quicker variants culminating in the 1275 'S' of 1964.

According to its accompanying British Motor Industry Heritage Trust certificate, this particular example - chassis C-A2S7 / 893013 - was built to right-hand drive, home market specification complete with fresh air heater, extra fuel tank and oil cooler on 16th September 1966. Originally painted in Almond Green with an Old English White roof and trimmed using Porcelain Green upholstery with Dove Grey inserts - the same livery it pleasingly sports today - the Austin was dispatched to supplying dealer Moir & Baxter Limited of Edinburgh some five days later. Fitted with a Goldseal (factory replacement) MKIII Cooper S engine at some stage, the Mini is further understood to have been re-shelled prior to entering the current ownership during 2008. Reportedly treated to a full professional respray and mechanical reconditioning that same year, the diminutive sports saloon shows an unwarranted 735 miles to its correct-type 120mph speedometer. Still retaining its original Fife 'FFG 927D' registration number, this appealing MKI Cooper S has journeyed down from the Scottish capital especially for the sale.

PLEASE NOTE: This lot has been in store prior to arriving at the sale. The brakes were working when we photographed the car last month but now need attention. We suspect, but have not confirmed, a loss of brake fluid.
Share: