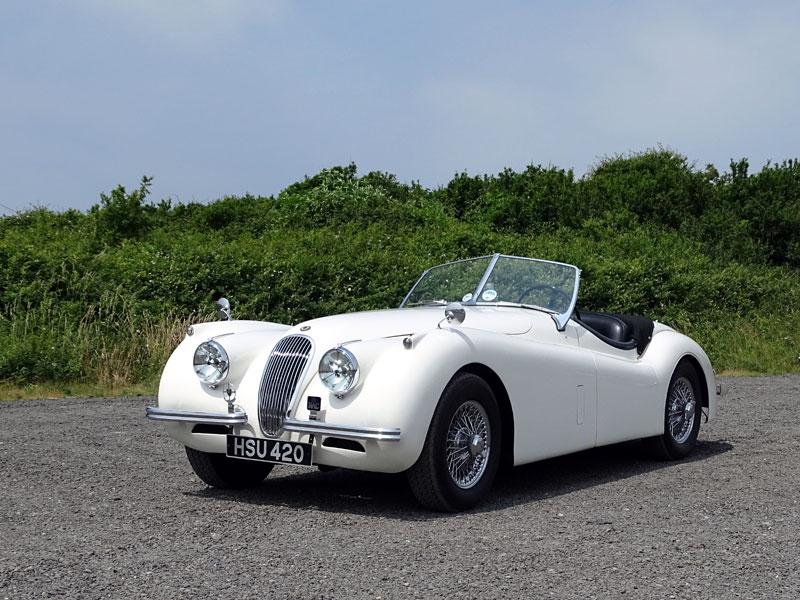 - Veteran of numerous European and UK rallies with the XK Register

The XK120 Roadster (Open Top Sports) is the original XK sports car design and was first seen at the 1948 London Motor Show. With its handcrafted radiator grille, petite "bumperettes" and stunning lines not to mention a 120mph plus top speed, the newcomer was the fastest car then available to the public. The XK120 went on to be the most successful Jaguar XK model in racing and rallying terms, with Sir Stirling Moss's TT win in the rain at Dundrod during 1951 just one of its many successes. The XK engine proved its unbreakability, not only when the XK120 Fixed Head Coupe 'LWK 707' set a world record by averaging 100mph for 7 days and 7 nights in 1952 at the banked Montlhery track but also by powering "C" and "D" Type sports racers to five Le Mans 24-hours victories. Exceptionally long lived, the XK engine was a staple of the Jaguar range from 1948 to 1980. Of the total 30,357 XKs manufactured, 12,078 were XK120s, of which 6,347 were to left hand drive OTS specification.

This particular example is the Super Sports derivative with the "C" type cylinder head providing a quoted 190bhp. Built in December 1952 and shipped to Hornburg, the California Jaguar Dealer, in January 1953, it returned to the UK in 1986 and has had only two owners since then. Nick Peace bought the car in 1991, joined the Jaguar Driver's Club and from 1996 to 2012 served as its XK Register Correspondent. He organised the XK Register's Autumn Rallies in Europe, and the UK, for a number of years and his wife continues as the XK Register Treasurer! The following numbered components are reportedly original and match the Heritage Certificate: Cylinder Head W6896-8S (the S suffix denoting its "C" type specification), Cylinder Block W6896-8S, Chassis S673307, Body F5350 and Gearbox JL14081. Although not listed on the Certificate, the Back Axle is numbered as 252 2756X (ratio 3.77:1). The longer tonneau cover is fitted with the roof and side screens stowed behind the seats, all in good condition.

In November 1999 a body-on refurbishment was started, stripping back to bare metal, including reskinning the aluminium doors, the 2-pack paint system was used. The engine was disassembled and hardened valve seats incorporated, Poly bushes were fitted to the front suspension. The entire restoration is documented and all the bills are in a presentation folder together with numerous other papers dating back to the car's 1986 repatriation. In 2014 the engine was re-bored, Hepolite pistons fitted, the crankshaft reground, a new clutch assembly installed and the gearbox oil seals replaced. The only concessions to modernity are: a stainless steel exhaust (fitted by Bell Swindon in 2010), Japanese high-torque/ low-current starter motor, aluminium radiator with a Series 2 E Type expansion tank on the bulkhead, Kenlowe fan, 2x 12volt Varta batteries (housed in the original 6v battery boxes) and 15-inch radial tyres.