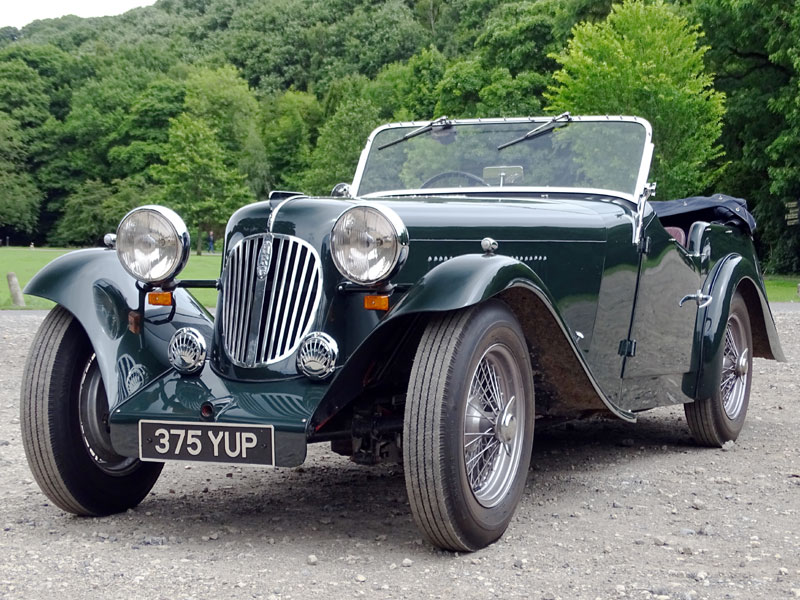 According to Ian Dussek's definitive work `HRG, The Sportsman's Ideal', it was the return home of Antipodean WW2 flying ace F.A.O. `Tony' Gaze in 1947 and his subsequent success aboard one of the first three HRG Aerodynamic models that helped the Tolworth-based marque get a toehold in the Australian market. Gaze joined the Melbourne firm of Brown & Dureau for 1949 and persuaded his new employer to import ten Aerodynamic chassis to be bodied locally. Some purchasers opted for single-seater coachwork but Brown & Dureau are reported to have commissioned Gordon Stewart of Sydney to clothe chassis W185 as a four-seater Tourer. Looking not unlike a pre-WW2 Aston Martin or Lagonda, the resultant machine was reputedly rallied by multiple Australian Grand Prix winner Doug Whiteford and Reg Nutt before Brown & Dureau sold it to John P. Ward of Toorak on 21st February 1952. Thereafter, the HRG passed through the hands of Alexander Fraser, Archibald Johnston Jnr (who used it to contest the Moomba Tourist Trophy at Albert Park on March 26th 1955), Francis Kolbe, Alroy Car Sales, Michael Thomas, Lesley Palmer, Le Mans Motors and David Eggleton. The latter acquired chassis W185 on 7th August 1956 and kept it for over fifty years. Laid-up during the 1960s and displayed at the National Automobile Museum of Tasmania for a time, the HRG had been partially restored by the time it finally left Mr Eggleton's care in 2009. Mechanically overhauled, rewired, repainted and reupholstered by the time that previous keeper Keith Barker of Henley-on-Thames repatriated it five years ago, the four-seater was further improved during his tenure. Entrusted to Total Trim Solutions of Thatcham, the HRG gained a new hood, tonneau, hood bag and sidescreens (£5,815), while Fenn Motor Works Ltd of Reading overhauled its starter motor (£634.40). Marles Steering Boxes of Hamnish supplied a new steering wheel, steering wheel boss and steering box complete with pitman arm (£6,054) not to mention five new Avon Tourist 550 x 16 tyres (£885). The same company got the dampers working properly and machined new hubs for the rear axle (£3,270). Benefiting from attention to its radiator and water pump since entering the current ownership in August last year, `375 YUP' is pleasingly understood to still retain its factory-fitted chassis, 1500cc Singer engine, gearbox and differential. The sole HRG known to have been bodied as a four-seater when new, chassis W185 has the added advantage of period competition history. Illustrated on p.318 of Mr Dussek's marque history, it is offered for sale with original Australian Owner's Certificate (dating from 1951), UK V5C Registration Document and numerous bills / invoices. An elegant and extremely rare sportscar and seemingly the only one which allows the `Hurg' experience to be shared with more than one friend or family member!
Share this page: