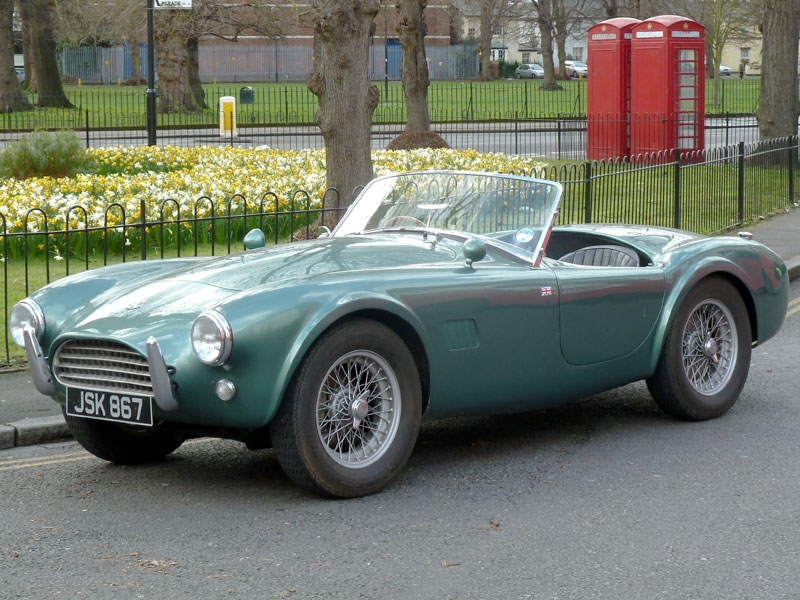 A notably late, home market AC Ace Bristol, chassis BE1199 has a well-documented history. The information below is condensed from a wonderful three-page letter that the vendor wrote to The AC Car Club in 2010, plus the Club's archive records and those of the AC Ace Register. Dispatched from the Thames Ditton factory on January 11th 1962 and initially finished in Svecia Red with Black interior trim and a hard top, chassis BE1199 was first owned by a Dr Robert Page-Blair of Cadogan Gardens, London who had it registered with his personal number plate 'RPB 880'. Re-liveried Blue by 1964 when then owner Lynton Moss Esq. was involved in a minor accident whilst driving through Ruislip, Middlesex, the AC first entered the vendor's custody that same year for the princely sum of £105. AC Cars refused to sell him the required driver's side wing and door to repair the car, so he approached their supplier and bought the panels direct (along with two new and complete AC Cobra bodies which he found irresistible). Chassis BE1199 was repaired and painted metallic Regal Red and it is believed the next owner was a Mr Jenkins of Chelsea, London. The Ace was involved in another minor accident during early 1966 which resulted in the vendor reacquiring it. Based in a Lexham Mews garage at the time, he chose to fit one of the Cobra bodies rather than refurbish the lightly damaged original. Painted White and by now re-registered as 'JA 131', the vendor recalls selling the AC to a local photographer named Sean Woodnutt. Although, the AC Car Club's records show the car as having been owned by a Mr Gathercole of Lambeth in 1967. Possibly Mr Woodnutt sold it to Mr Gathercole. During the late 1960's Mr Gathercole reportedly blew a piston and rather than repair the engine he fitted a Ford V6 unit. Over twenty years later in 1989, the car passed through the hands of a succession of well-known dealers and collectors and ended up having another Bristol 100D2 engine fitted, and then in late 1991 it was painted green. Stated as then having a Swiss owner in 1992 and a German (Hamburg) owner in 1998, the car was subsequently owned in 2000 by a Mr Lee from Hong Kong who appears to have kept the car in England. Between October 2000 and July 2001, Mr Lee spent over £30,000 on 'JA 131' with a well-known Bristol specialist having the car thoroughly recommissioned, including a refresh of the engine cylinder head and gearbox. The current V5C states that the AC was acquired by a Lincoln-based gentleman in 2006 and it is understood that he fitted some replacement wheels to sharpen the car's handling and retained its 'OY 8365' number plate. Purchased by the vendor for the third time in August 2010, he has now decided to part company with it once more. The generously sized history folder contains many notes and letters from the above mentioned owners' clubs and a quantity of expired MOT certificates. Supplied with a hard top, this rather special car is described by the vendor as having a 'good' interior and paintwork with a 'very good' body, engine, and gearbox, adding that it 'drives very well'. A beautiful motor car with an exciting and documented history.
Share: