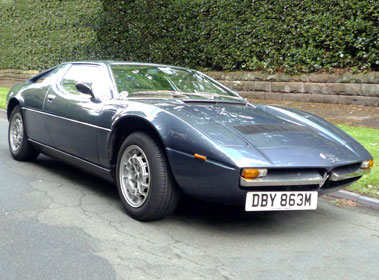 Introduced at the October 1972 Paris Motor Show, the Maserati Merak (Tipo 122) was intended to rival the Ferrari Dino 246 and Lamborghini Urraco. Named after a star from the Ursa Major constellation, the compact 2+2 sportscar's styling deliberately aped that of its Bora supercar sibling (both models being penned by Giorgetto Giugiaro). Based around a steel monocoque chassis equipped with all-round independent double-wishbone suspension, four-wheel ventilated disc brakes and rack and pinion steering, the Merak was powered by a longitudinally-mounted 'quad-cam' 2965cc V6 engine allied to a five-speed transaxle gearbox. Fed by triple Weber carburettors, the powerplant (a smaller capacity version of which had already seen service in the Citroen SM) was credited with 190bhp and 188lbft of torque. Reputedly capable of 0-60mph in 7.5 seconds and 140mph in standard tune, the Merak has always been something of a rarity on UK roads with just 231 thought to have been officially imported between 1973 and 1982.

Finished in blue with magnolia upholstery, this particular left-hand drive example is described by the vendor as being in "excellent overall" condition with regard to its engine, five-speed manual gearbox, electrical equipment, interior trim, bodywork and paintwork. Reportedly treated to a recent and very extensive overhaul after which it returned a dynamometer reading of 190.6bhp @ 4,923rpm, the 'quad-cam' V6 is deemed by the seller to be "as good now as when the car rolled out of the factory back in 1974". While, he goes on to say that 'DBY 863M' "must surely be one of the best Meraks in the country today". Whether or not the car lives up to these claims is for potential purchasers to decide for themselves. Riding on alloy wheels, this handsome `junior supercar' is offered for sale with MOT certificate valid until December 2009.
Share: