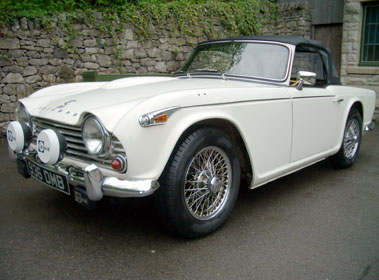 Introduced in late 1964, the Triumph TR4A was visually distinguished by a new grille while under the skin it featured revised body-to-chassis mountings and most importantly of all independent rear suspension. Further benefiting from rack and pinion steering and disc / drum brakes, the newcomer was well received by the contemporary motoring press. Powered by a torquey 2138cc four-cylinder OHV engine allied to four-speed all synchromesh manual transmission, the two-seater was reputedly capable of 110mph and 0-60mph in 10.5 seconds. This particular example had just two private keepers before entering the current (deceased) ownership for the princely sum of £600; its original VE60 logbook and last purchase receipt are included in the history file. Believed but not warranted by the vendor's agent to have covered some 37,400 miles from new, the Triumph was entrusted to John Bee of Sheffield for an extensive 'body off, bare metal' restoration in 1987 (at an odometer reading of 34,900).

Rewired with an alternator and Kenlowe electric fan, the TR4A was resprayed in Old English White and retrimmed using black vinyl upholstery, red carpets and a wooden dashboard. Describing the bodywork and paintwork as "tidy", the vendor's agent adds that the OEW-finished underside looks "solid" but considers the door trims and carpets are now "a little shabby". He further informs us that the four-speed manual plus overdrive gearbox seems "good", while he goes on to say "the engine does have good oil pressure, however, it smokes when hot especially after a period of overrun suggesting a problem with valve guides or stem seals". On the plus side when the engine was overhauled by Peter Burgess of Alfreton it is understood to have been uprated with "a gas-flowed cylinder head and 'fast' camshaft". Sporting the cherished registration number '936 DMB', the Triumph also boasts a "tidy hood and tonneau cover". Offered for sale with V5 / V5C registration documents, restoration photos, numerous invoices, MOT certificate valid until October 30th 2009 and a hardtop (though, the latter will need to be collected from Stoney Middleton, Derbyshire).
Share: