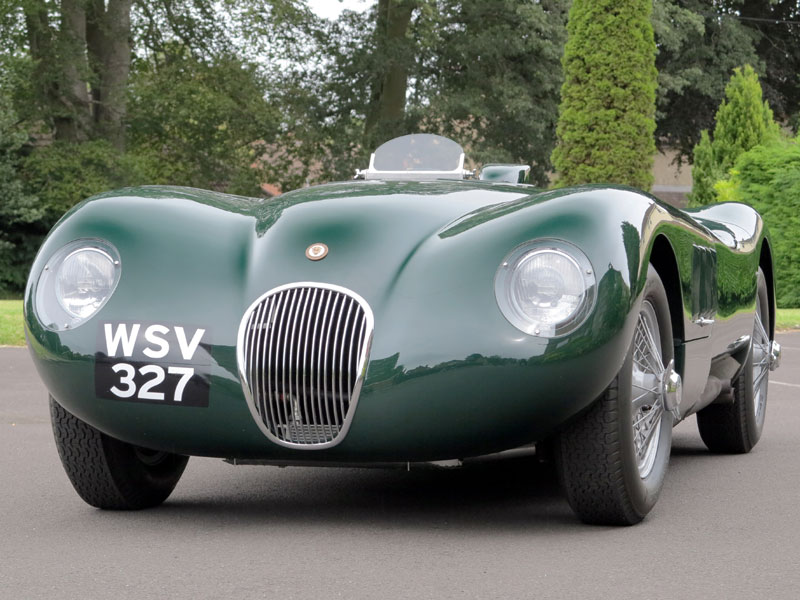 In many ways the XK120's success, both on and off the track, took Jaguar by surprise. Among the fastest production cars of its day, the model had obvious competition potential but the endurance racing derivative that debuted at the 1951 Le Mans 24-hours was an altogether more specialised machine. Conceived behind closed doors, the XK120-Competition - a.k.a. the C-Type - was considerably faster, lighter and nimbler than its roadgoing sibling. The work of Bob Knight and Malcolm Sayer respectively, the newcomer's sophisticated multi-tubular chassis frame and aerodynamic all-aluminium bodywork allowed it to conquer contemporary Ferrari, Aston Martin and Mercedes-Benz opposition. Famous for winning the 1951 and 1953 Le Mans 24-hours, the C-Type may well have triumphed on the 1952 event had Jaguar not chosen to make various unproven modifications. Total C-Type production amounted to just 53 cars but even after Jaguar had turned its attention to the D-Type privateers continued to campaign the older design with considerable success.

Unsurprisingly given its beauty, speed and pedigree, the C-Type has inspired numerous imitations. However, very few can be as exacting as The Linstone Car. Just nineteen when he began building racing cars in 1951, Cyril Linstone has yet to stop! Although, his career has been primarily focused upon single-seaters (most famously with Emeryson) he was present at many of the same circuits and meetings as the iconic sports racer in its heyday. Commissioned to build a C-Type copy during the early 1990s, Linstone had a considerable advantage over those attempting the same task either before or after him and that was a set of over 400 detailed factory drawings. It may not happen now but back then a Ford-owned Jaguar were happy to release these blueprints and as such effectively gave their approval to the project.

The Linstone Car is estimated to have cost circa £120,000 to create and that is without making a financial allowance for the 3,000 or so hours which Cyril has put into it. Working from factory drawings means that the two-seater incorporates various internal details which a 'tool room' copy would be unlikely to replicate. The Linstone Car's donor identity is that of a green 1964 Jaguar, while its alloy bodywork was fabricated by specialist M.L. Panels whose staff were trained at Bob Smith's renowned R.S. Panels. Indeed, the latter firm were responsible for crafting the radiator grille at a cost of several thousand pounds. Sporting an authentic C-type sump, Lucas Special Equipment competition dynamo and twin sand-cast SU carburettors (complete with cold air box), the 3.4 litre straight-six XK DOHC engine has done very little mileage since being thoroughly overhauled by Peter Lander of Sigma Engineering. Allied to a correct-type four-speed manual gearbox, it is understood to develop some 250bhp.

The factory drawings were adhered to in a devoted manner. Thus, The Linstone Car utilises needle roller bearings in its pedal assembly (rather than bronze bushes) and a special reverse-engineered universal joint in its steering column not to mention the correct mounts for its instruments etc. More obvious features include a correct-type fuel tank, side-exit exhaust and aluminium-rimmed competition wire wheels. Completed in 2013, plans to race the two-seater have been laid aside. Nonetheless, it possesses a valid FIA Historic Technical Passport. The subject of an article in an upcoming issue of Octane magazine and quite simply the best C-Type Evocation we have had the pleasure of offering, The Linstone Car is worthy of close inspection.
Share: