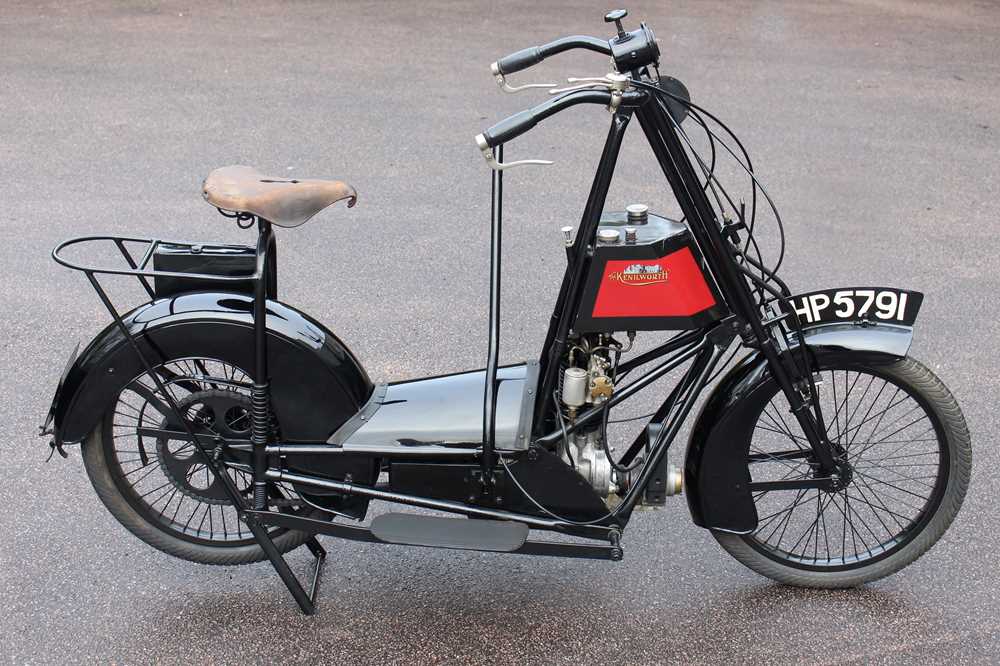 
Registration No: Unregistered
Frame No: None
Engine No: None
CC: 150
MOT: Exempt

As well as being renowned as the chief engineer for the Alvis car company, Captain Smith-Clarke also designed scooters. The first machine was built by Captain Smith-Clarke for his wife and put into production, firstly by Booth Brothers and then by Kenilworth Utility Motors. It was christened 'The Kenilworth' as that was where Smith-Clarke lived at the time and its fuel tank sports a profile of the ruins of Kenilworth's famous castle.

When first manufactured in 1919 this machine had a sloping engine, 18-inch wheels with some paneling to enclose the rear wheel. It was fitted with a 142cc four-stroke engine driving a Whittle belt to a countershaft with chain final drive. Initially sold as a 'stand up' scooter, a sprung saddle was soon added linked by a subframe to footboards and all sprung together for comfort. By 1923 the design had been modified to include a more upright cylinder and for its time a revolutionary 'infinitely variable' gearbox where the gear ratio alters as the friction disc moves along its shaft, the nearer the middle of the flywheel face the lower the gear ratio. As such this makes it the forerunner of all the CVT Constantly Variable Transmission scooters seen on the road today. Although the Kenilworth outlasted most of its competitors, production ended in 1924.

To quote contemporary reports in the 'Motor Cycle' of November 1922:- "...Kenilworth Machine now fitted with an infinitely variable gear."

In spite of the fact that large numbers of scooter type machines have disappeared from the market, the little Kenilworth has met with success and has proved exceedingly popular amongst its owners. Originally the machine had primary belt drive to a countershaft, the final drive being by chain; only a single gear ratio was available. The engine is now set longitudinally in the frame, and the crankshaft carries a cast-iron flywheel at the rear end; against this flywheel bears a Ferodo-faced driven disc having a diameter of 7in. The disc is carried on a square shaft and supported in Skefko ball bearings, the final drive sprocket lying on the outside of the central bearing. Only a very light compression spring is needed for engagement. The whole friction gear is mounted in a cast aluminium case which also forms the engine bearer and lies neatly in the standard Kenilworth frame. So light is the operation of the gear that the control is effected by an ordinary carburetter air lever, and since the Vici single-lever carburetter is employed, the only addition to handle-bar fittings is a clutch lever. Since the whole mechanism is enclosed it is unaffected by wet, and the friction gear is so efficient that it is possible to get away from a stand-still on a gradient of 1 in 9 with ease; the range of gear ratios available vary from 6 to 1 to 12 to 1. Propelled by a 142 c.c. o.h.v. engine the Kenilworth is noted for its sturdy construction and sprung saddle pillar and footrests. It is a handy little machine, and in its latest form should make an appeal - especially to ladies who require to travel short distances daily.

This fascinating and historically significant scooter appears to have been built in 1923 by Booth Brothers in Coventry and was discovered a few years ago in Kings Lynn. Restored in 2003/2004 by Red Triangle, the foremost authority on Alvis cars, only one other example is known to survive and has been part of a private collection of Alvis cars for a number of years. Unfortunately there are no documents with the scooter but there are a couple of old tax discs and the vendor can help with dating letters to help to recover the original number or to get an age related number issued.