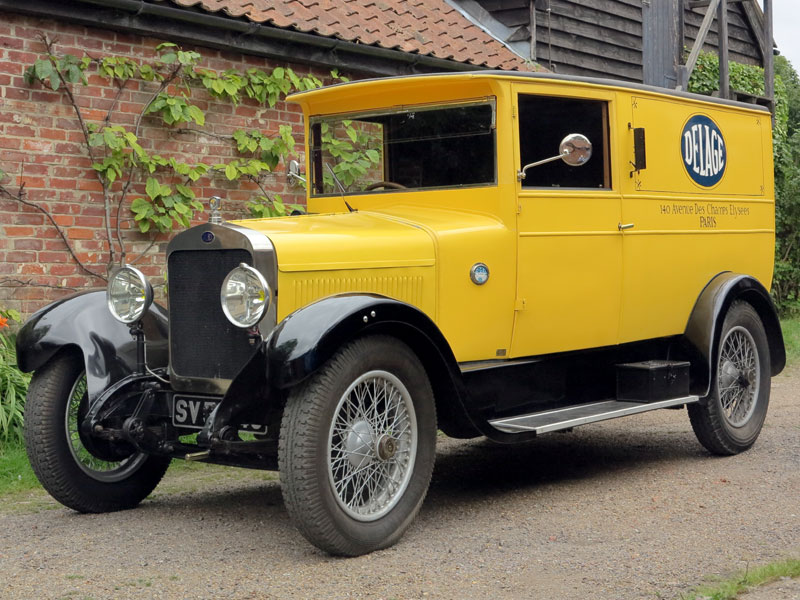 - Extensively refurbished during the current ownership with attention paid to the engine, gearbox, chassis, electrics and body etc

- Recently completed a 400-mile rally and deemed ready for immediate touring or deliveries!

The vendor admits that this wonderful, probably unique, vintage van is an as yet unsolved mystery for, while Delage manufactured some wonderful motorcars, they never, as far as he is aware, produced any commercial vehicles. However, the C in DIC apparently classifies it as continental and therein may lie a clue, as the French colonies were many in number back in 1927. What is more certain is that the shapely coachwork was created by E.Gallard of Yonne and that a Mr Jon Champ was responsible for importing 'SV 5846' to the UK from Lyon in 1993. It was subsequently sold to a Mr Colin Mallet from whom the vendor acquired it in 1996. Although apparently very original it was by then 'very tired, having obviously been used for many years without major attention'. However, as it was such an attractive vehicle he decided to retain it in van guise and restore it.

The suspension and braking stems were refurbished as required. The engine was stripped, the crankshaft crack tested and reground, the block rebored and the entire unit reassembled with many new parts. The gearbox was treated to new bearings throughout and the clutch relined. The Delage was totally rewired, the Dynastart refurbished and suitable Marchal headlights and klaxon acquired and installed. The bodywork was completely restored with a new ash floor and frame and aluminium side panels in place of the steel originals. All the original fittings and features were retained. This labour of love took many years to complete, since when the lovely Delage has travelled little more than 4,000 miles; 400 of which were achieved during a recent rally. This splendid period commercial vehicle currently boasts a new battery, good tyres and an MOT valid to June 10 2016, so is ready for immediate touring duties or, of course, deliveries! One thing's for sure - it will draw admiring glances wherever it goes.
Share: