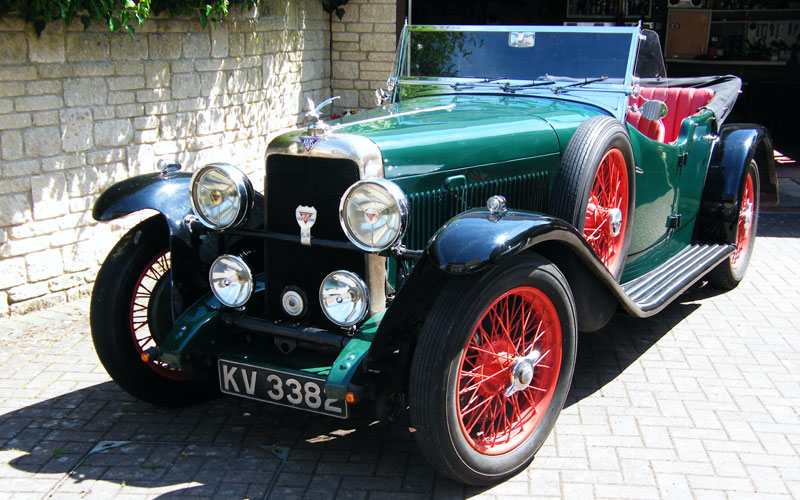 Introduced in September 1932, the Alvis Firefly was built to the same high standards as its more expensive brethren. Notably low-slung, it was based on a 'double-dropped' ladder frame chassis equipped with all-round semi-elliptic leaf-sprung suspension, friction dampers and four-wheel 14in drum brakes. Utilising a 9ft 10.5in wheelbase and 4ft 4in track, the model was praised by the contemporary motoring press for its ride / handling capabilities. Powered by a 1496cc OHV engine - essentially a four-cylinder version of that found in the legendary Speed 20 - allied to either four-speed manual or ENV pre-selector transmission, the Firefly was reputedly capable of 75mph. Available with a choice of saloon, tourer or drophead coupe coachwork, it remained in production until 1935 by which time some 871 are thought to have been sold.

Despatched to Messrs John Thompson of Wolverhampton as a Carbodies Saloon on 21st December 1932, `KV 3382' is understood to have acquired a replacement Cross & Ellis Tourer prior to the 1980s when its then owner and his brother embarked upon a `chassis up' restoration. Entering the current family ownership during 2003, the Alvis has since been treated to a replacement `J type' steering arm (2007) and fresh clutch (2013). Featured in `Alvis Firefly Twelve' by Simon Fisher (p.28), `KV 3382' features four-speed manual transmission and is finished in Green over Black with Red leather upholstery. An appealing Post Vintage Thoroughbred, this handsome four-seater is offered for sale with V5C Registration Document and history file (including sundry restoration photos).
Share: