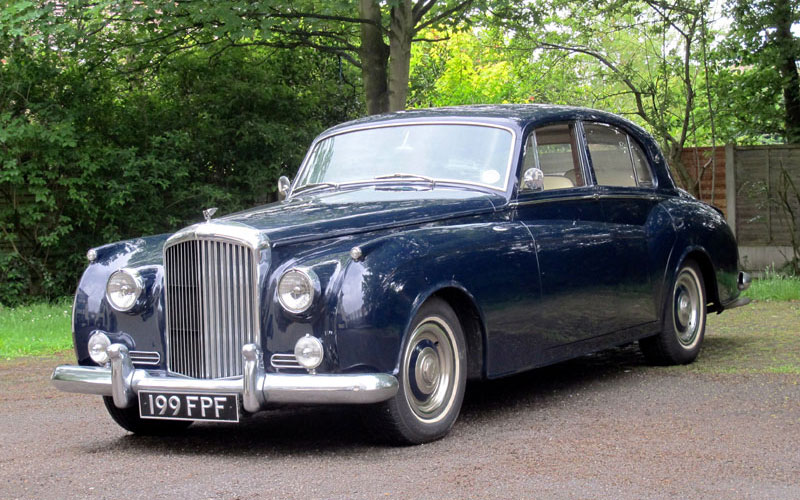 - The third of just twenty-six S1s bodied to design no. B10

- Old MOTs on file date back to 1983, numerous restoration invoices

According to Davide Bassoli's authoritative book 'Every Cloud has a Silver Lining', chassis B470AN was the third of just twenty-six S1s that James Young clothed to design number B10. Supplied new via Jack Barclay Ltd (the then owner of James Young) and road registered as `199 FPF' by Surrey County Council on July 1st 1956, the aluminium-bodied four-seater later belonged to Charles Fradley Esq. of Warmingham. Purchased from the latter by Roger Wilson Esq. of nearby Wistaston in August 1989 for the princely sum of £14,000, the Bentley was subsequently treated to an extensive restoration. Having spent approximately £30,000 on the project including sourcing numerous parts from the likes of Healey Bros, Introcar, Ron Stratton & Co, Jack Barclay Ltd, Rollaben (SES) Ltd not to mention having work done by David Felton, S.C. Gordon Ltd, S. Brunt (Silverdale Staffs) Ltd and Derby Plating etc, Mr Wilson lost patience and sold the S1 to its previous keeper during August 2005. In need of an interior refurbishment but otherwise pretty much complete, chassis B470AN was entrusted to Cartlidge Coach Trimming and Upholstery (£5,799) and Chapman & Cliff Veneering and Polishing (£850). As well as fitting the Saloon with power steering, electronic ignition and five new radial tyres, marque specialist Gary Bretherton also treated its original 4.9 litre straight-six engine to an overhaul (new inlet valves / guides, replacement piston rings and reground exhaust valves etc).

An unwanted gift purchased at our recent Duxford auction, the car is understood to be in 'good overall' condition with regard to its engine, automatic transmission, electrical equipment, interior trim, bodywork and paintwork. This rare James Young coachbuilt S1 is offered for sale with tool kit, copy chassis cards, sundry restoration invoices and assorted MOTs dating back to September 1983 (which document an increase in mileage from 40,433 to c.44,000).
Share: