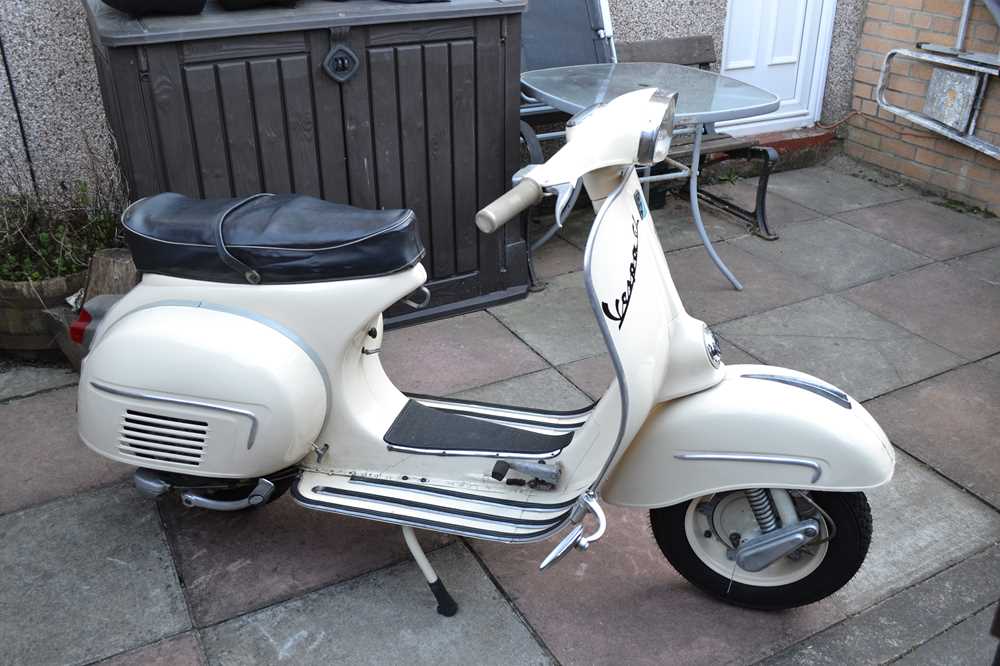 The Piaggio industrial group was devastated by the consequences of World War 2. Amongst the projects muted to rescue the company was an idea to help mobilise the Italian public with a new transport concept ‘The motor scooter’. During trials the buzzing noise of the engine and body shape combined for the scooter to be christened the ‘Vespa’ the Italian translation for wasp. From the launch in 1946 it was such a success that it has become a symbol of taste, fashion and style and is one of the favourite global design icons of all time, The Vespa. By 1965 Douglas were importing Italian built Vespas into Great Britain. The GL150 was launched in 1962 and manufactured up until 1965. It was a popular machine with almost 80,000 units sold worldwide. A larger bodied scooter with 10 inch wheels it could achieve 6.5hp and a top speed of 59mph.

This GL carries an amazing story. The first owner, a Mr Valentine, bought the scooter new in Ipswich, England on May 31st 1965. He intended to learn how to ride it but was called up to Newcastle to work and took his worldly possessions on a train to Newcastle central station, including the scooter. He pushed it to Ipswich train station and then pushed it again from Newcastle station to Low Fell near Gateshead in total gaining its first 13 miles on the clock. Today's vendor then helped his friend put the scooter into an outhouse where it lay for over 50 years. When Mr Valentine sadly passed the scooter came into the possession of the vendor. The vendor decided in 2019 to restore the scooter and it was treated to a new coat of paint, powder coated by Better Blast of Shiremoor to a high standard. The engine was given rejuvenation by Northumbria Scooters and she had a complete new wiring loom fitted. Given the fact that the scooter had never been used on the road this is an amazing fact in itself. The engine is still using its original parts and stator plate. The original lights and almost all other parts were re-used including the original seat which is in great condition. And of course the original speedometer. She is supplied with her tool box key. The remaining 3 miles were done test riding the recommissioned scooter. She is in a presentable condition but with some minor scuff marks on the front mudguard. The vendor has been able to register the scooter with its original number with the help from the Veteran Vespa Club. It is registered as a historic vehicle. He intends to be on hand at the auction at The National Motorcycle Museum on April 6th to talk to any interested persons. This most unusual history makes this a truly collectible Vespa.