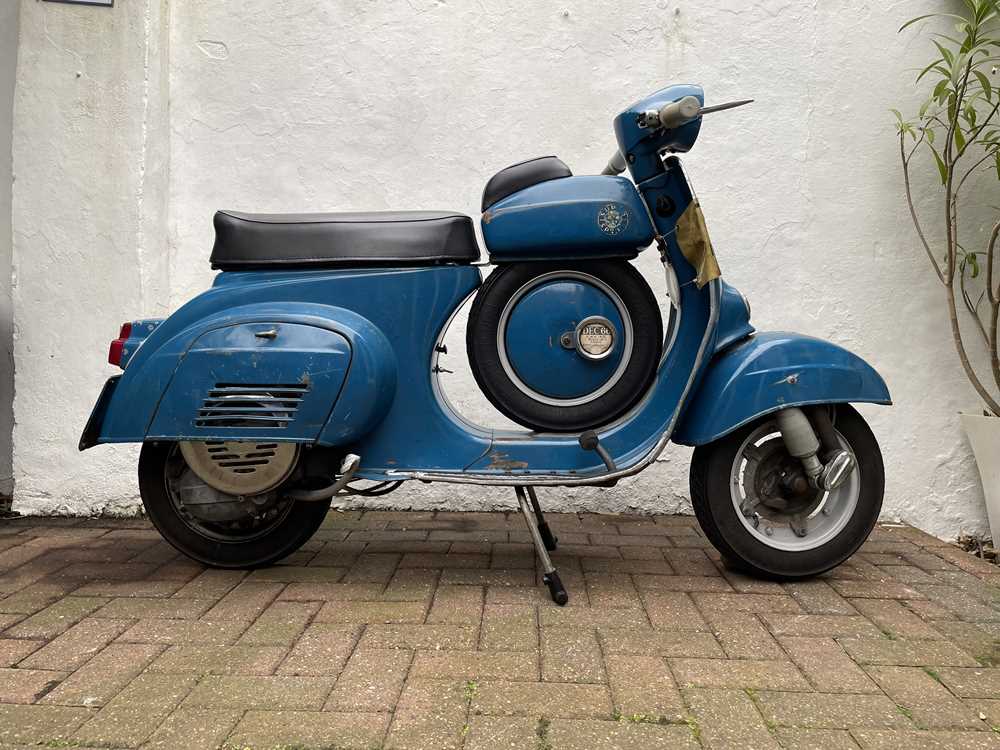 The Piaggio industrial group was devastated by the consequences of World War 2. Amongst the projects muted to rescue the company was an idea to help mobilise the Italian public with a new transport concept ‘The motor scooter’. During trials the buzzing noise of the engine and body shape combined for the scooter to be christened the ‘Vespa’ the Italian translation for wasp. From the launch in 1946 it was such a success that it has become a symbol of taste, fashion and style and is one of the favourite global design icons of all time, The Vespa. By the early 1960’s Vespa Douglas in Great Britain were importing Italian built Vespas as opposed to continuing to manufacture them. The Vespa SS90 made between 1965 and 1971 is much sought after by collectors due to its extreme rarity and only just over 5000 were produced. Most of these have been lost to the ravages of time and overly ambitious riders. The SS90 was developed as a sporting variant of the small frame Vespas. With a dummy fuel tank, a centrally located spare wheel, narrower more aerodynamic fairing and a pad on top of the dummy tank riders could crouch low behind the headlight to reduce drag at higher speeds. The two-stroke 88.5 cc engine used in the Super Sprint is a single-cylinder, air-cooled unit with a bore/stroke of 47/51 mm and an 8.7:1 compression ratio. It’s paired with a 4-speed gearbox, the dry weight is 77 kilograms, and the top speed is 93 km/h (58 MPH).

This SS90 has full history with almost never seen detailed provenance. Registered new new on August 15th 1966 by Andre Baldet (the famous Moto Baldet dealership), Northampton it was sold on August 22nd 1966 to a David Jakeman. It was sold back to the then now called Glanfield Baldet who then sold it again on 24th September 1969 to a Gary Trodd. It was then sold to a Colin Prior on 25th August 1972 who kept it until our vendors became custodians in 2008. It was discovered for our vendors by the late Bill Drake the legendary Vespa expert in a loft in Southampton. During the scooters time with Colin Prior it featured with him in the Southern Evening Echo on June 9th 1976 as a the overall winner of the 50-160cc class at The Southampton and district Motorcycle awards in Eastleigh. Colin was also a member of the Hornets, the Eastleigh district Scooter club and the original leg shield banner is also still with the scooter. There are also present original photographs of the scooter acrobatically performing at a gymkhana with Colin Prior. When our vendors acquired the scooter in 2008 it was simply cleaned and re-assembled with road use in mind. The engine was re-commissioned using the original components or NOS and original parts by Vespa engine expert Matthew Phillips. The exhaust was replaced with a pattern SITO exhaust and replacement seat, speedometer, wheels and dummy tank pad were added. The original 60’s exhaust is still present and will be supplied with the scooter. She appears to have the original lights, plastic tool compartment, foot runners and is original in almost every other way. She has a working steering lock with replacement key. The original Hornets leg shield banner is also supplied. The scooter will also be supplied with the original fan grill, the original sponge tank padding, the original seat support padding, original number plate and original Neiman steering lock cover with pin. There is also a 1966 tax disc from its year of purchase. It is seldom that this most rare and sought after Vespa model with exceptional detailed history and originality comes around. We expect significant interest in it.