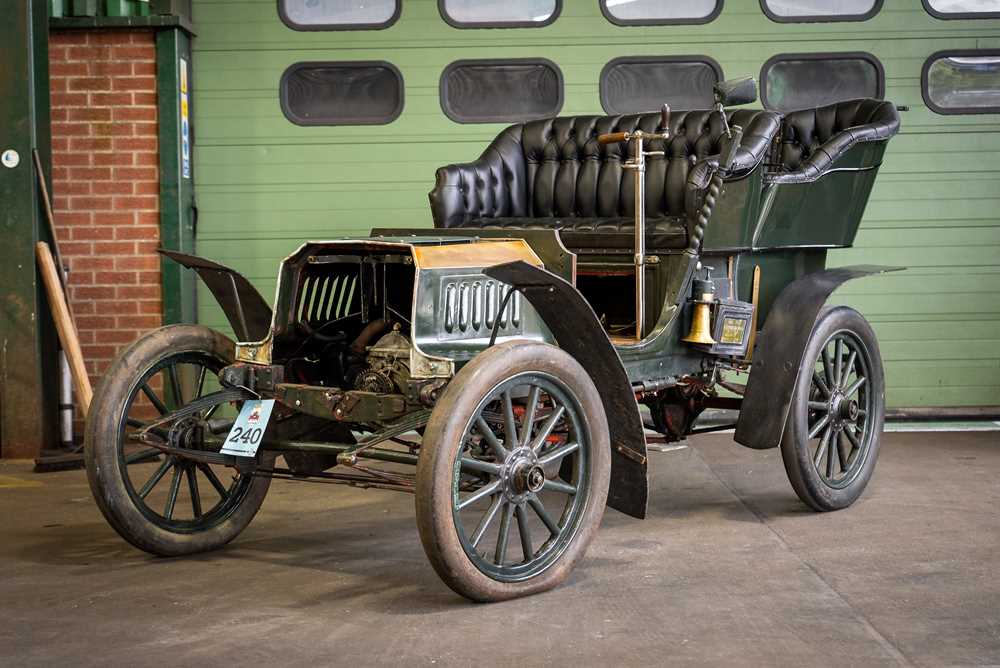 Notable as the oldest surviving motor vehicle brand in the Western Hemisphere, The Autocar Company grew out of the Pittsburgh Motor Vehicle Company with its name change being prompted by a move to new premises in Ardmore, Pennsylvania during 1899. A talented engineer, founder Louis Semple Clarke was an early adopter of spark plugs for petrol engines, shaft drive and wear-reducing oil circulation systems. An experimental tricycle, ‘Autocar No.1’ is now in the Smithsonian Museum Collection as is the initial example of the marque’s 1901 design which was the first American car to feature shaft drive. Available in Green or Red, the Autocar Type VIII sported Four-Passenger Rear Entrance Tonneau coachwork. Powered by a horizontally opposed twin-cylinder 12hp engine, its three-speed transmission was said to permit speeds of between 3mph and 35mph. Initially available with tiller steering, a wheel was later made optional. All-up weight was estimated to be 760kg. Responsible for building the first truck to be made publicly available in North America, The Autocar Company stopped making passenger vehicles entirely during 1911. Some 111 years later, it remains in existence as a subsidiary of the GVW Group LLC.

The early history of chassis 1288 is a mystery. However, it is understood to have belonged to a Mrs Harriet Russell of Kansas by 1960. Still resident in the same locale when the vendors’ father bought it from the estate of Jasper G. and Bernice S. Wiglesworth forty-four years later, the Autocar was subsequently imported to the UK and issued with a Certificate of Date by the Veteran Car Club of Great Britain on October 16th, 2006. Red when it first arrived on these shores, the Type VIII has since been repainted Green. Sporting the distinctive registration number ‘TYP 55’ which would arguably be more appropriate for a Bugatti, the four-seater has been enjoyed on numerous London to Brighton Veteran Car Runs (the most recent of which being 2016) not to mention the Royal Irish Automobile Club’s 2015 Pioneer Run. Dry stored in recent years, the Autocar is missing its brass radiator but otherwise appears to be substantially complete. Coming from a deceased estate and in need of recommissioning / refurbishment, this handsome, twin-cylinder, four-seater Veteran nevertheless has the makings of a rewarding project.