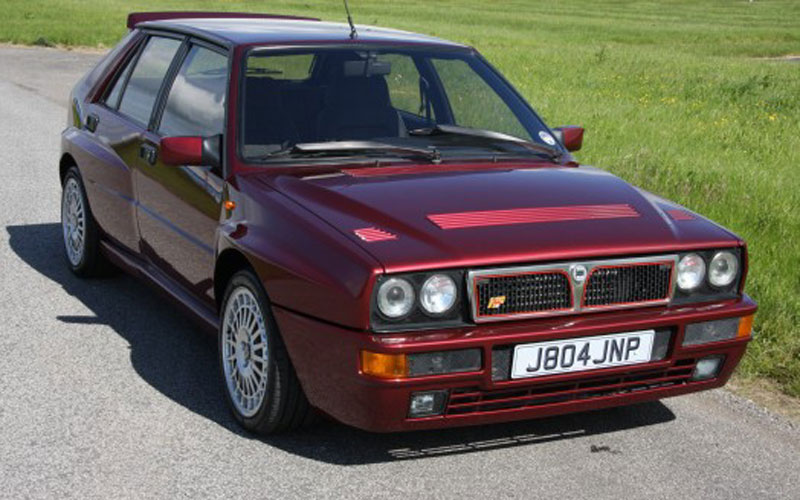 The Giugiaro-penned Delta range was launched in 1979. The ensuing HF Integrale versions boasted four-wheel drive and turbocharged power, modified versions of which dominated the World Rally Championship between 1987 and 1992. The Evolution I models of 1991/1992 were the final batch of 'homologation specials' and featured wider track front and rear, extended wheel arches and adjustable roof spoiler.

'J804 JNP' is a lefthand drive car from the second year of Evo I production. It was registered new in Italy in April 1992 and is beautifully presented in Winner Red Metallic and trimmed in Grey Alcantara. It first came to these shores in October 1998 and has had just three owners since; the current keeper having owned the Lancia since 2010 and retained it for dry use only. He informs us that it is 'highly original, unrestored and immaculate'. It has covered 88,000 kilometres (55,000 miles) to date and boasts a full service history comprising 17 stamps, all courtesy of well-known marque specialists - the Integrale has benefited from a full service recently, plus a new timing belt. The car's only departures from standard are the addition of: a full stainless steel exhaust system; OMP short shift gearchange and trim; Tarox front brake discs and pads; stainless steel flexi brake hoses; slightly shorter, stiffer road springs; Evo II 16 inch alloy wheels; and CD player. In May 2005, the Lancia won the Meguiar's Spa Italia d'Elegance, and the related cup and certificate will be supplied with the car, as well as two sets of keys, a full tool kit, and all the car's original books and paperwork. The vendor presently regards the bodywork as 'excellent', the paintwork as 'extremely good', the interior trim as 'almost as new', the turbo engine as having 'very good oil pressure', and the five-speed transmission as 'very good'. A rare offering.
Share: