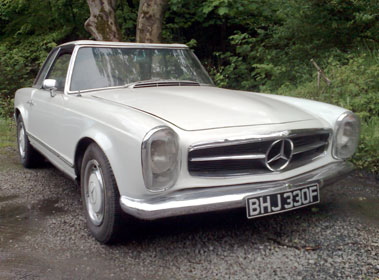 Successor to both the exotic racebred 300SL 'Gullwing' Coupe and its humbler 190SL sibling, the W113 series SL proved more comfortable than the former and faster than the latter (a point emphasised by Eugen Bohringer's 1963 Liege-Sofia-Liege rally victory). The rarest W113 variant, the 250SL was officially introduced at the March 1967 Geneva Salon. Blessed with the same effortlessly elegant Paul Bracq styling as its earlier siblings, it was powered by a new seven bearing crankshaft 2496cc SOHC straight-six engine that developed some 148bhp and 159lbft of torque. Equipped with all round independent suspension and four-wheel disc brakes, its 'square' track (some eight inches wider than the contemporary Jaguar E-type) gave notably sure-footed handling. Able to blur the divide between city streets and open roads with ease, the majority of 250SLs were specified with four-speed automatic gearboxes. Available in 'Californian Coupe' (2+2-seater), 'Convertible' (2-seater) or 'Coupe Convertible' (2-seater) guises, the last of these came with both a soft-top and the famous 'Pagoda' hardtop roof (so called because of its gently scalloped centre section). Faster than the 230SL which preceded it yet stiffer-sprung and more agile than its 280SL successor, the 250SL remained in production for just a single year accounting for a mere 5,126 sales worldwide.

Finished in white with matching detachable hardtop and brown MB-Tex upholstery, this particular 2+2-seater example is said to have been supplied new by London dealer, Normands of Mayfair. Shipped to America at some stage, bills on file reportedly show that the 250SL was treated to "a major engine overhaul, new petrol tank, replacement fuel pump and fresh servo in 2001". Since returning to the UK almost six years ago, the Mercedes-Benz is understood to have covered "about three or four thousand miles" as well as benefiting from "four new shock absorbers and three new brake callipers". Sporting automatic transmission and paintwork which the vendor describes as "shiny but not the world's best", 'BHJ 330F' has seen little use of late and as such will require recommissioning prior to road use. Apparently running and driving albeit that the engine is currently "a little choked up", this rare and desirable W113 SL has the makings of a rewarding project.
Share this page: