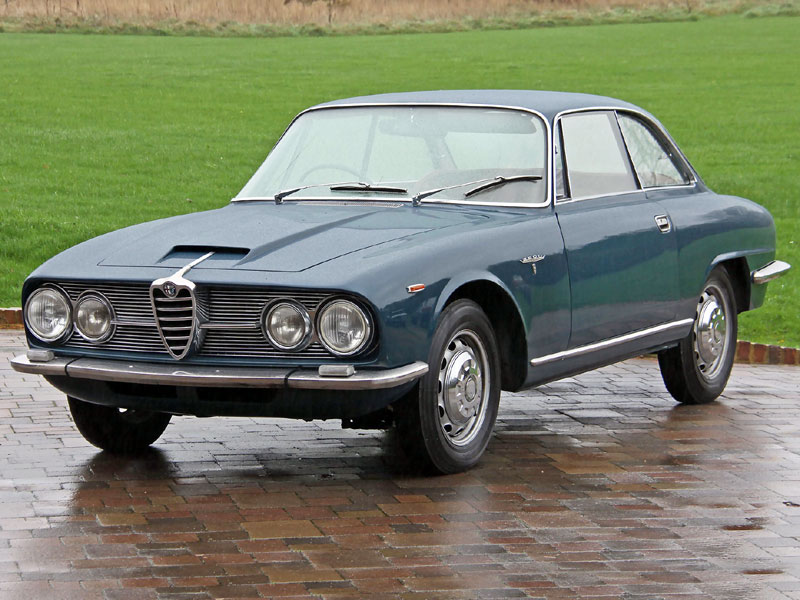 - One of only 596 right hand drive Sprints made

- Resident in America from the mid 1970's until recently

Alfa Romeo made 6,999 2600 Sprint Coupes between 1962 and 1966, of which only 596 were manufactured to right-hand drive specification. The engine was a 2584cc in-line six cylinder twin-cam and was mated to a five-speed gearbox. According to the Alfa Romeo Museum Archives, this Sprint was manufactured on May 5th 1965 and was invoiced by the factory to Alfa Romeo UK the following day. The original paint colour was Bluette with a Tan leather interior, just as it is now. A copy of an early registration book issued in May 1969 informs us that the car was first registered on July 29th 1965, and by 1969 'JXC 139C' resided in Swansea. In 1970 the car changed owners and moved with them to Essex, via Gloucestershire. The last entry in the registration book shows the owner moving to another address in Essex soon after 1974. A letter on file between two later owners states that between 1974 and 1976 the Sprint was exported to America and owned by a couple in Portland, Oregon, until April 1984. The car was then purchased by another person in Portland who appears to have carried out a restoration, which they completed around 1990 (photographs and invoices are on file). Post restoration the car was very appropriately licenced as '2600 GD', the GD referring to guida a destra, Italian for right-hand drive, and the Oregon State Title Certificate is still in the history file. The car was then acquired by someone in Concord, northern California, in 2005, who owned an Alfa Romeo repair shop in nearby Vallejo. It is not known when this last owner sold the car, but his last California Motor Vehicle Identification Card on file expired in 2008, and the car reportedly returned to England in early 2015. This rare Sprint is now described by the vendor as 'running well', with the 'original' interior in 'good order'. A new MOT certificate will be issued prior to sale and we are informed that NOVA has been carried out.

PLEASE NOTE: This vehicle will require re-registration if it is to remain in the UK.