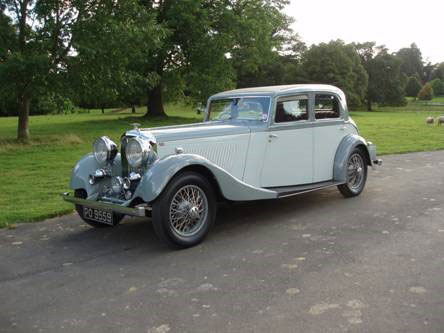 At the dawn of the 1930s with the reverberations of 'Black Friday' felt worldwide, competition between carmakers grew increasingly desperate. Thus, while WO Bentley sought to refine his 8-litre, Rolls-Royce responded by dabbling with a sports car concept. Their concerns as to the branding of 'Peregrine' (as the project was labelled internally) were alleviated by Bentley's collapse in 1931. Outflanking rivals D. Napier & Son, they acquired Bentley wholesale for £125,257. With a department brief that 'the new car must be as unlike the Rolls-Royce models as possible'. Derby engineers set about preparing 'Peregrine' for flight. Built on a 'double-dropped' chassis. the newcomer employed a tuned version of the Rolls-Royce 20/25's 3,669cc OHV straight-six engine. Boasting twin SUs, wilder camshaft, strengthened con-rods and higher compression ratio, it developed around 120bhp without compromising on refinement. Equipped with the 20/25's four-speed manual gearbox, high-geared steering and hydraulic dampers, the resultant 'Silent Sportscar' was unveiled to great acclaim at the August 1933 Ascot Races.

Chassis No.B54AH was sold new to Colonel E W Margesson in 1934 and clothed in an all-alloy, Close Coupled Saloon body by Park Ward. The coachwork is attractively finished in two-tone Grey while the contrasting interior features eye-catching Red leather upholstery, matching carpets and re-varnished wood cappings. The engine was apparently overhauled a few years ago, and an oil filter conversion carried out; since when 'PO 9559' has travelled just 2000 miles. In addition: the rear axle has been refurbished, the road springs renewed, and the wheels overhauled with new stainless steel spokes and treated to new spinners. The Bentley is being sold complete with its original mascot and a set of newly re-plated door handles. The vendor regards this delightful Derby as 'pretty and ready to enjoy' and grades the engine, gearbox and interior as 'A1' and the coachwork and paintwork as 'good'.