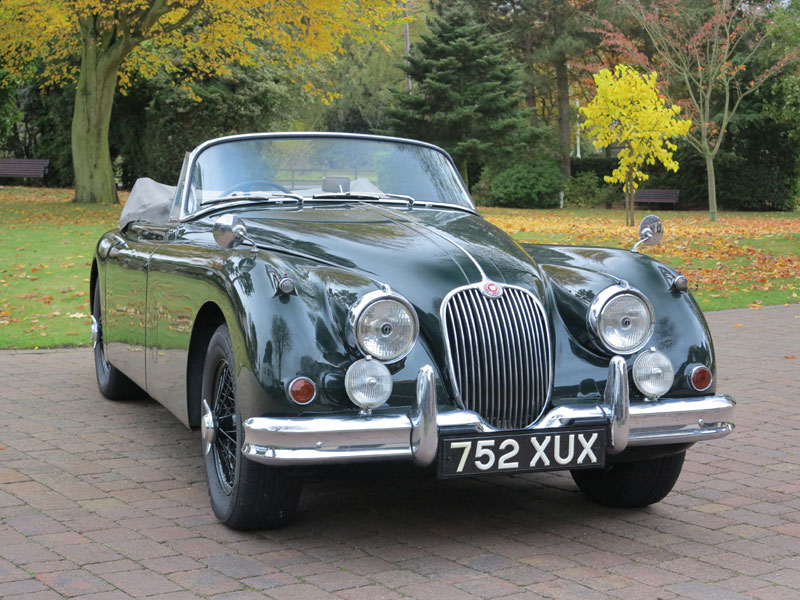 - A 'matching numbers' car purchased by the vendor from JD Classics

The 1950s saw Jaguar win the world's greatest endurance race - the Le Mans 24-hours - more times (five) than any other manufacturer. A blend of existing and new technology, the XK150 was the Coventry firm's last model to feature a separate chassis but its first to be available with four-wheel disc brakes. Unveiled in 1959, the range-topping 3.8 litre 'S' could be had in Roadster, Fixed Head Coupe or Drophead Coupe guises (the latter being the most expensive). With a quoted 265bhp and 260lbft of torque on tap thanks to its straight-port cylinder head and triple SU carburettors, Jaguar's flagship sportscar could only be had with four-speed manual plus overdrive transmission. Reputedly capable of 0-60mph in 7.6 seconds and 141mph, its performance was on a par with rival Aston Martin, Maserati and Ferrari offerings. Decidedly rare, total right-hand drive XK150 'S' 3.8 litre Drophead Coupe production amounted to just 69 cars.

Completed on 5th July 1960, chassis T827610 was supplied new via Ritchies of Glasgow. Initially road registered as '400 BGD', the identity of its first keeper is not recorded. Belonging to David Sydney Gordon Esq. of Ludlow (a doctor who also served as Surgeon Lieutenant Commander to the Royal Naval Reserve) by the 1970s, the Jaguar is known to have passed through the hands of Richard de la Rue Esq, John Henry Wright Esq, Kurt Kauk Esq, Philip Scott Esq and renowned dealer JD Classics before entering the current ownership. The earliest MOT certificate on file suggests that the XK150 'S' 3.8 litre had covered some 59,000 miles by November 1979. Some thirty-six years later, its odometer shows an unwarranted (1)06,565 miles. Pleasingly retaining its original Suede Green leather upholstery, the Drophead Coupe had its factory-applied British Racing Green livery renewed during Mr Kauk's custodianship (1984-2010).

Entrusted to marque specialist Marina Garage of Bournemouth for a new clutch (2011) and thorough engine overhaul (2012) whilst in Mr Scott's care, chassis T827610 was advertised by JD Classics as a 'matching numbers example' and 'a presentable and very sound, original car which would be ideal for touring or rallying'. The vendor has certainly enjoyed several memorable jaunts aboard the Jaguar and is only offering it for sale due to the acquisition of a very rare prewar MG. Further enhanced during his tenure, recent fettling has seen the XK150 S 3.8 litre treated to a new sump gasket, re-plated ash tray and replacement servo / master cylinder for its uprated braking system etc.

Starting readily upon inspection, this decidedly rare and undeniably handsome Drophead Coupe is accompanied by a UK V5C Registration Document and history file (including a list of previous keepers and numerous bills / invoices).