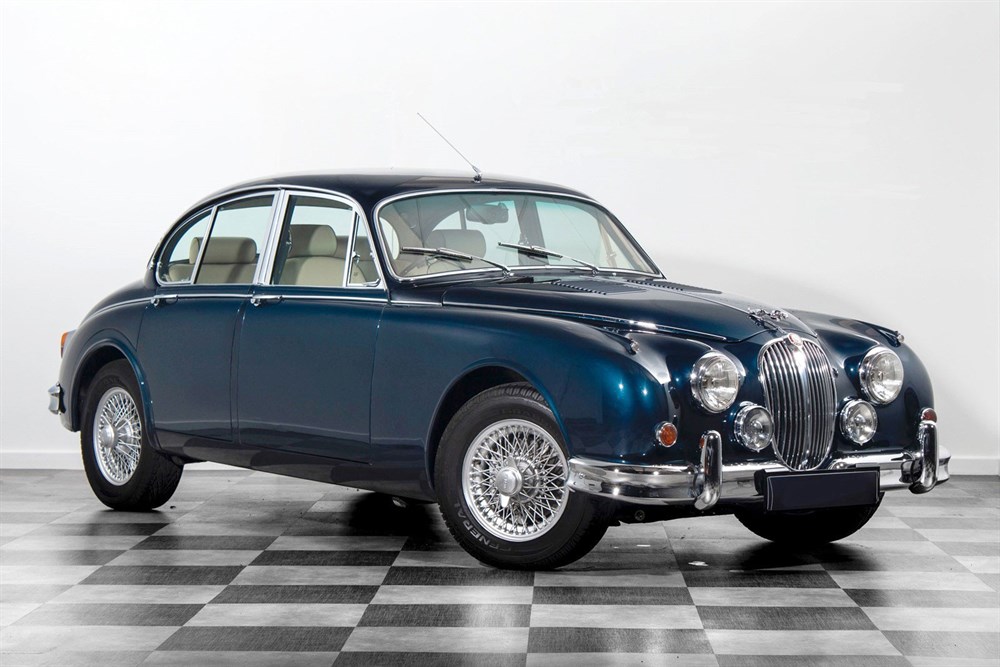 - Subject to a comprehensive and fully documented restoration

Assembled in the car friendly climate of South Africa, chassis A234378 was imported to the UK during 1988. Resident in London for a time, the Jaguar moved to Wales circa 2005 and was taken off the road four years later. Entering the current ownership during 2012, the MKII has since undergone a comprehensive and fully documented restoration. Stripped back to bare metal, the bodyshell was repaired as necessary but found to be comparatively rust free (doubtless due to its South African origins). With most of its original panels retained, the saloon was repainted inside and out by Finishline, Herts to an exceptional standard. The suspension, steering and brakes were all refurbished and improved using a Harvey Bailey handling kit, 420 power steering and vented 4-pot disc brakes. Heated front / rear windscreens were installed together with new door seals and rejuvenated brightwork.

The engine, gearbox and rear axle were thoroughly overhauled. The manual gearbox, a 4-speed synchro unit with overdrive, was treated to all new seals and refreshed internals. The 3.8 litre engine was stripped and fitted with a modern VSE rear crankshaft seal, refurbished cylinder head and new pistons, bearings and seals etc. Set-up for `fast road' use, the straight-six also boasts a new clutch, big bore exhaust, electronic ignition and twin 2-inch SU carburettors. Cooling has been improved with an aluminium radiator. The heater has been uprated for the UK's cooler weather and the body internally lined to prevent some of the heat soak in hot weather. A new wiring loom, all new switchgear and lighting, powered by an alternator housed in a dynamo body, with a modern satnav with Apple Car Play completes the car's impressive specification. A full re-trim has been carried out to the highest standards by AV Classics, including completely refinished and re-veneered wood and more modern Jaguar Group seating. An exceptional MKII ready to be enjoyed or shown.