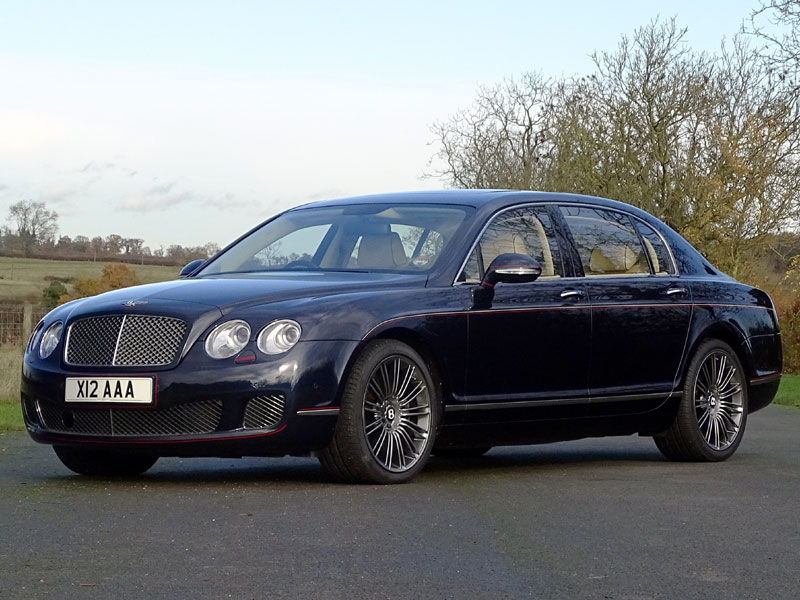 'There is much to love about the Bentley Flying Spur: it creates a sense of occasion like few other cars at any price, and offers an endearing blend of performance, potential top speed and braking power. The interior sets it apart from the more mainstream rivals, and there can be no denying that it fulfills its remit as a big, lavish limo. It's even fun to drive, in a brutish kind of way' (Autocar magazine).

Boasting a 200mph top speed, the Speed variant of Bentley's Continental Flying Spur became the world's fastest saloon car upon its launch at the July 2008 London Motor Show. As well as 600bhp, the newcomer's reworked 6-litre W12 twin-turbocharged engine produced a constant 553lbft of torque all the way from 1,700rpm to 5,600rpm. Allied to six-speed ZF automatic transmission (complete with paddle shifters), it enabled the four-door, four-wheel drive Crewe missile to accelerate from 0-60mph in 4.5 seconds. Reputedly capable of generating 0.95g of lateral acceleration on a 300-foot skidpan, the model also benefited from a more responsive air suspension set-up (10mm lower ride height, thicker anti-roll bars, stiffer dampers), solid-mounted front subframe, 20-inch multi-spoke alloy wheels, retuned speed-sensitive Servotronic steering plus a more progressive Electronic Stability Programme. Visually distinguished by dark-tinted chrome matrix inserts to its front grille and lower air intakes, the Speed also sported wider rifled exhaust tips, special kickplates to all four apertures, a three-spoke steering wheel and diamond patterned leather to its seat facings and door cards. Among the more impressive options available for the super saloon was Bentley's Adaptive Cruise Control which utilised a long-range radar sensor mounted in the lower front grille to monitor the road ahead. If a slower moving vehicle came within range then the ACC system would automatically lock onto it and brake and accelerate the Contintental Flying Spur Speed as necessary so as to maintain whatever 'time gap' its driver had pre-determined.

Offered for sale with clear title by order of the High Court, this particular example has formed part of an extensive London-based private collection since 4th August 2011 when it was purchased from Jack Barclay for £134,000. Finished in Dark Sapphire with Magnolia leather upholstery, the Bentley has since been re-registered as 'X12 AAA' and had its external appearance augmented by red pinstripes. An HPi check reveals that (a) the Bentley has had one former keeper and (b) it is not recorded on their stolen, finance, security watch or insurance write off databases. While a UK Government Vehicle MOT History search shows that the Flying Spur Speed was MOT tested at 9,113 (20/12/2013), 10,262 (30/12/2014) and 10,836 (22/12/2015) miles. Now displaying some 11,000 miles to its odometer, this imposing luxury super saloon is fitted with Bentley's Adaptive Cruise Control and will hopefully possess a fresh MOT certificate by the time of sale (the current one expires on 4th January 2017). Offered for sale with owner's handbook, service handbook (recording services at 4,932, 7,487, 9,106 and 10,255 miles), Jack Barclay Used Vehicle Contract, various quick reference guides and sundry paperwork.