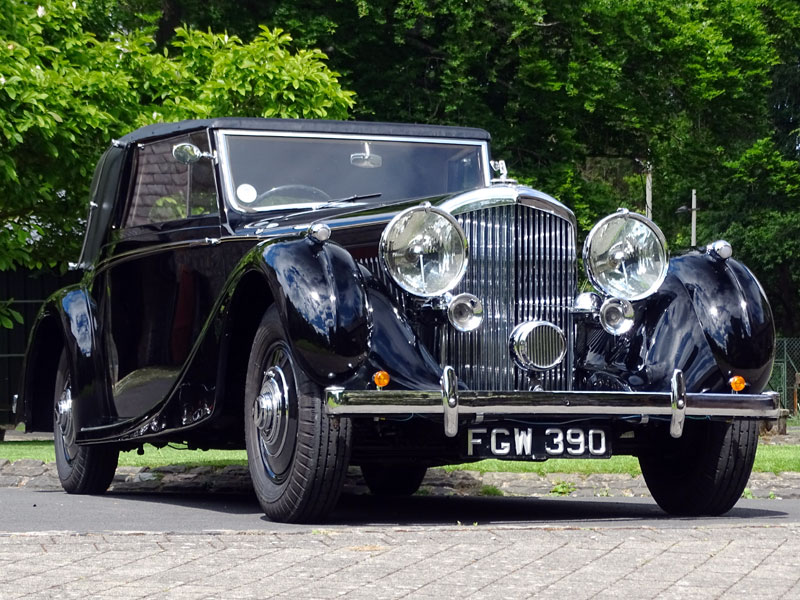 - The work of renowned stylist A.F. McNeil who had previously penned some of Gurney Nutting's most notable creations

Unveiled to great acclaim at the August 1933 Ascot Races, the Derby Bentley was underpinned by a 'double dropped' chassis featuring all-round semi-elliptic suspension and four-wheel drum brakes. Powered by a more potent version of its Rolls-Royce 20/25 sibling's 3669cc OHV straight-six engine allied to four-speed manual transmission, the newcomer was soon christened the 'Silent Sportscar'. Responding to increased competition from the likes of Alvis and Lagonda, Bentley gave its customers the option of a larger 4257cc engine during the 1936 season. Priced at £50, a comparatively modest sum compared to the cost of a basic chassis, the new unit proved so popular that the smaller capacity powerplant was soon dropped. Nicely balanced to begin with, the Derby Bentley chassis proved more than capable of handling the extra power and torque. Further revised in late 1938, the 'Silent Sportscar' gained centralised chassis lubrication, automatic shock absorbers (with hand control override), better steering, improved 'big-end' crankshaft bearings and - most importantly of all - an 'overdrive' gearbox with direct drive on 3rd gear and overdrive on 4th gear. Available from chassis B2MR onwards, these modifications allowed it to tackle Europe's first generation of high-speed roads such as Italy's autostradas or Germany's autobahns with confidence. Long sought after due to their relaxed cruising capabilities and theoretical 100mph plus performance (they were geared to 107mph in 'overdrive' top), production of the final MR and MX series amounted to a mere 200 cars.

Arguably the pre-eminent British coachwork designer of the 1920s / 1930s, former Cunard Line employee A.F. McNeil jumped ship from Gurney Nutting to James Young shortly after the latter was acquired by Rolls-Royce and Bentley dealer Jack Barclay in 1937. Blessed with a wonderful eye for proportion and detail, McNeil penned a supremely elegant Sedanca Coupe design that James Young fitted to just three Derby Bentley 'Overdrive' Series chassis (B72MR, B86MR and B97MX). The first of the trio, chassis B72MR was supplied new to George Sinclair Brodrick Esq. on 15th November 1938. Aged just twenty-three at the time, Mr Brodrick was the grandson of American railway magnate Jay Gould who had once been deemed the world's richest man (the $2.7 million spent contesting his estate during the 1890s entered the Guinness Book of Records as the most costly legal action in history).

Mr Brodrick's obituary in The Telegraph noted that he 'mixed dangerous cocktails' and 'went up to Trinity, Cambridge, where he arrived in his Bentley accompanied by his chauffeur. An impoverished young gentleman attended all the lectures on his behalf and provided him with a comprehensive set of notes three weeks before his Finals, which he sailed through'. Awarded an MBE for military service whilst serving in the Irish Guards during World War Two, Mr Brodrick sold the Bentley back to Jack Barclay during November 1940. Thereafter, it is known to have belonged to P.B. Cow Ltd, Harold Radford & Co Ltd, Mrs Howard Sneyd and Messrs Basil Roy Ltd before being acquired by Major P.R.J. Everidge FRCS OBE in February 1961. The veteran of numerous Continental runs during Major Everidge's custodianship, chassis B72MR had its original engine extensively overhauled at an indicated 84,584 miles by G. Ashley Carter of Dorchester, Oxon in November 1984 (£3,422.23).

The subject of an article in Retroviseur magazine whilst owned by noted collector / dealer C.A.R. Howard and subsequently featured in his autobiography, the Bentley then passed to fellow dealer Gregor Fisken and on to Hugh Boucher Esq. of Sittingbourne, Kent. Mr Boucher had Derby Bentley specialist Blackmore Engineering Company refurbish the suspension, rejuvenate the heater, fettle the wiring and restore the dynamo etc during January 1997. The following month saw chassis B72MR entrusted to James E. Pearce Specialist Coachbuilders who fitted flashing indicators, rehung the doors and smartened its overall appearance. Further improved by Sargeants of Goudhurst at an indicated 92,733 miles during August 1997, the Bentley was serviced and sold via Frank Dale & Stepson to Dutch collector J.W. ten Ham some two years later.

Reissued with its original registration number 'FGW 390' upon repatriation by Frank Dale & Stepson last Summer, chassis B72MR entered the current ownership not long afterwards. A lifelong Bentley enthusiast, the vendor was prompted to acquire the Sedanca Coupe by fond memories of another MR-series 'Overdrive' machine. As well as having acknowledged expert Ken Lee give the four-seater a thorough inspection (paying particular attention to the soundness of its wooden body support frame), the seller treated it to a new pipe for the ride control pump and a full service. Currently showing some 96,800 miles to its odometer, 'FGW 390' presents as an older restoration. The Sedanca roof above the front occupants folds away neatly and the doors not only open and close easily but also sit well within their apertures. Understood to have covered circa 12,000 miles since its last major overhaul, the 4.25 litre straight-six engine runs smoothly and pulls well. Sadly, the vendor does not find driving a Derby Bentley as easy as he once did hence the reason that this notably elegant example is being offered for sale.