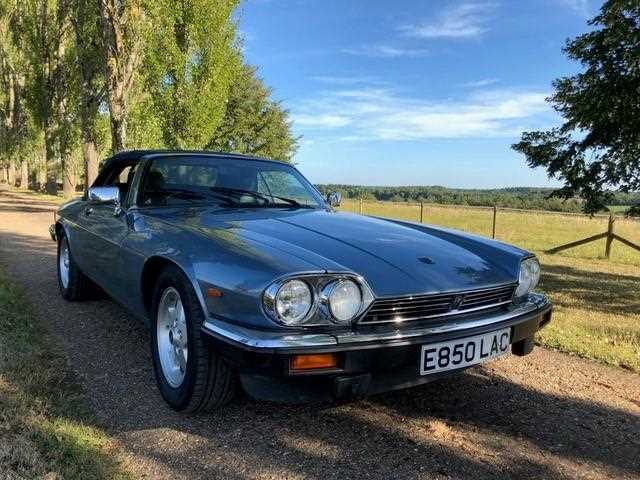 Finished in light blue metallic with dark blue leather this XJ-S 5.3 convertible has had just 4 previous keepers and has covered a warranted 50,000 miles from new. Entered from a private collection it benefits from the fitment of a wood rimmed steering wheel and is expected to possess a fresh MoT in time for the sale. Described has having “very good” bodywork, paintwork, engine, automatic transmission and interior it is offered with some service history.

Based on the XJ Saloon, the XJ-S was launched in September 1975 as a replacement for the legendary E-Type, though it was a cat of a very different character. Based around a two-door monocoque bodyshell equipped with all-round independent suspension (double wishbone front, lower wishbone/radius arm rear), four-wheel disc brakes and power-assisted rack and pinion steering, some of its underpinnings even found their way into the later Aston Martin DB7 and Jaguar XK8. At launch, the newcomer was powered by Jaguar's silky smooth 5343cc V-12 engine mated to either Borg Warner Model 12 automatic or manual transmission. The latter was soon dropped and in 1979 the Borg Warner automatic unit was superseded by GM's three-speed Turbo-Hydramatic 400 automatic box. Though relatively heavy, the XJ-S was no mean performer and would hit 60mph in around 7.8 seconds and top 140mph flat out. Economy, however, was not its strong point - cue the High-Efficiency (HE) engine. The XJ-S was equipped with the HE unit from July 1981, its Michael May-designed cylinder head not only endowing it with far better fuel economy, but also more power - 295bhp.

The first owner of this vehicle was John Egan who was the Chief Executive Officer of Jaguar at the time.