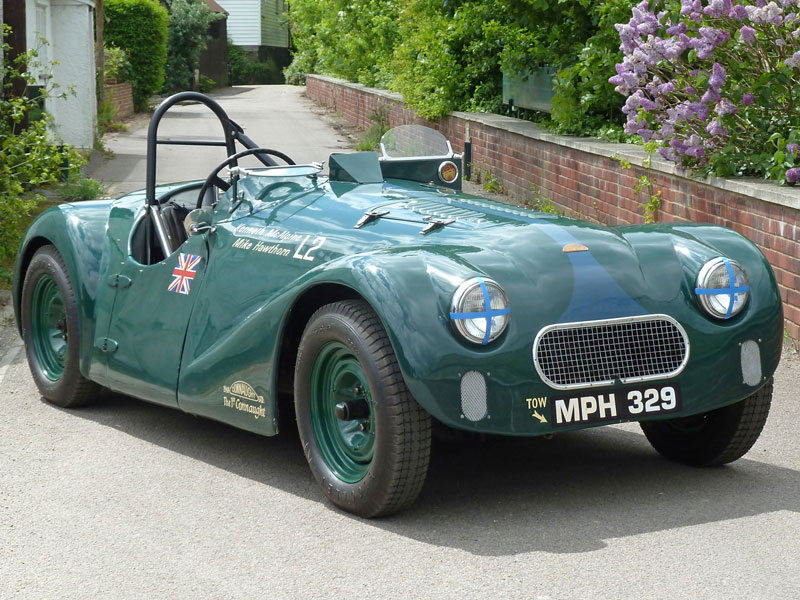 - Chassis despatched from Lea-Francis in March 1948 and delivered to Continental Cars, founders of Connaught

The Connaught name is not part of every automotive enthusiast's lexicon, yet few companies did more to put Britain's post-war motorsport industry on the map. By far its biggest claim to fame was Tony Brooks' victory in the 1955 Syracuse GP aboard a Type B single-seater Connaught - the first for a British car since 1923. However, it is the two-seater road going sports cars that preceded the company's monoposto ones that concern us here. Connaught Engineering was sired by the Continental Automobiles concern of former WWII RAF pilot Rodney Clarke. The firm specialised in the sale and preparation of Bugattis and had expectations of becoming agents for the Molsheim-based manufacturer. When this did not materialise, Clarke, and his right-hand man Mike Oliver, decided to produce a sports car of their own design and the Connaught (CONtinental AUTomobiles) marque was born.

The first of the new breed were the L1 and L2, where the L was a nod to Lea Francis, whose components were fundamental to the construction. The chassis for example, was primarily that of a 14hp Lea Francis with minor adjustments to the damping and steering, while the 1767cc four-cylinder engine came from the same stable. The functional, two-seater alloy body with forward-opening front section was designed by Clarke and crafted by Leacroft of Egham. The difference in specification between the L1 and L2 largely concerned the tune of the engine, and ultimately no L1s were produced, while the final L2 count was three prototypes and three production cars.

In conjunction with Monaco Motors of Watford, Oliver squeezed up to 122bhp from the standard engine, courtesy of high-lift camshafts, high-compression pistons, four branch exhaust manifold, a quartet of Amal carburettors, and dry sump lubrication. The L2 unit drove through a close-ratio Lea Francis gearbox and, with a dry weight of 2130 lbs, a standard specification 102bhp L2 could hit 60mph in 11.9 seconds and achieve some 104mph flat out.

The sale car was the first example off the stocks, the chassis for which was despatched from Lea Francis to Charles Follet on March 26, 1948. It was then sold to Continental Automobiles and registered to the company's major financial backer, Kenneth McAlpine of construction fame, on October 8. Registered 'MPH 329' from new, it made its competition debut the following June by winning its class at Prescott. Six days later McAlpine was 4th in the 'Miscellaneous' class of the BOC's Silverstone meeting. The following month he finished a creditable 2nd in a five-lap scratch race at the same circuit and was 2nd to the sister car of Rodney Clarke at Goodwood a fortnight later. The following month he turned the tables on Clarke by leading another Connaught 1-2 at Blandford. McAlpine achieved many further notable results before parting with the Connaught in late 1951, during the September of which 'MPH 329' was reputedly driven to 6th place in the Goodwood International Sports Car Race by a young Mike Hawthorn. The car then passed through various UK hands before being shipped to Australia, where it was raced before a 10 year spell in the York Motor Museum, Perth. By 1989 it was back in the UK and, following restoration, was seen at various Grand Prix meetings in the hands of Mike Lester. Subsequent owners have included Dr Michael 'Spike' Milligan, Peter Cox and David Duffy. The vendor acquired 'MPH 329' in 2009.

Presented in traditional British Racing Green and trimmed in Black leather, this hugely significant historic racing car comes complete with a metal chest brim full of race results, correspondence, invoices, copies of old registration documents, MOT certificates and more. Of undisputed provenance, the Connaught would be potentially eligible for some of the world's most prestigious historic motorsport events such as the Goodwood Revival and Monaco Historics to name but two.

PLEASE NOTE: Since the catalogue went to press we have been contacted by a Mike Hawthorn historian to say that although the 1958 Formula One World Champion had an association with Connaught he is not thought to have ever driven 'MPH 329'.