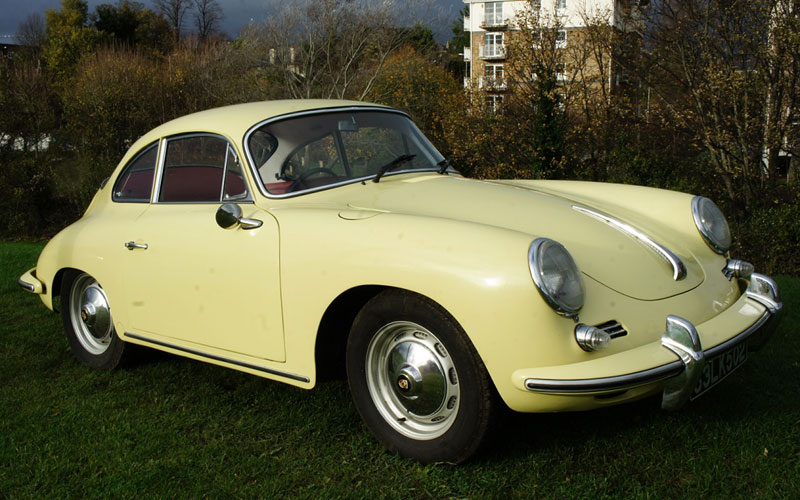 - The subject of much restoration work

Launched in 1948, the design of the Porsche 356 had been a collaboration between `Ferry' Porsche, the son of the company's founder, and its chief body engineer Erwin Komenda. The first examples were handcrafted from aluminium in Gmund, Austria. With materials in short supply following the war, the model initially employed many parts from the Volkswagen Beetle (the car famously designed by Porsche Senior). However, within two years it had been considerably re-engineered, while production had moved to Zuffenhausen in Germany. The bodies were now made of steel. Debuting in 1955, the 356A benefited from uprated running gear and various tweaks to its all-round independent torsion bar suspension. Lasting for four years, it gave way to the more US-orientated 356B in 1959. Equipped with a 1600cc four-cylinder unit as standard, this latter model underwent a facelift in 1961 when its heavily criticised T-5 bodyshell was replaced by the T-6. Benefiting from larger front / rear windscreens, reprofiled bumpers and a sleeker roofline, it remains for many the ultimate 356 silhouette.

This 60hp T-6 B was built by Karmann in 1962 and first registered in 1963. Sold new in America, it was imported to Ireland in 1998 since when it has had two previous owners, the penultimate since 2005. Converted to right-hand drive and recently acquired following a period of storage, the vendor advises it has been the subject of much restoration work at some point but that sadly no paperwork exists giving details. Finished in Yellow with Red vinyl interior and registering some 83,000 miles, it is described as "driving well" with "very good" shut lines and bodywork, "fair" paintwork, "good" interior and "very good" original engine breathing through Zenith 32NDIX carburettors. Retaining 6V electrics, it is accompanied by a Certificate of Authenticity from Porsche GB and is expected to possess a fresh MoT in time for the sale.

PLEASE NOTE: We are advised that this vehicle does not have an MOT and will require a replacement kingpin and bushes. The vendor will supply the kingpin to the successful purchaser.