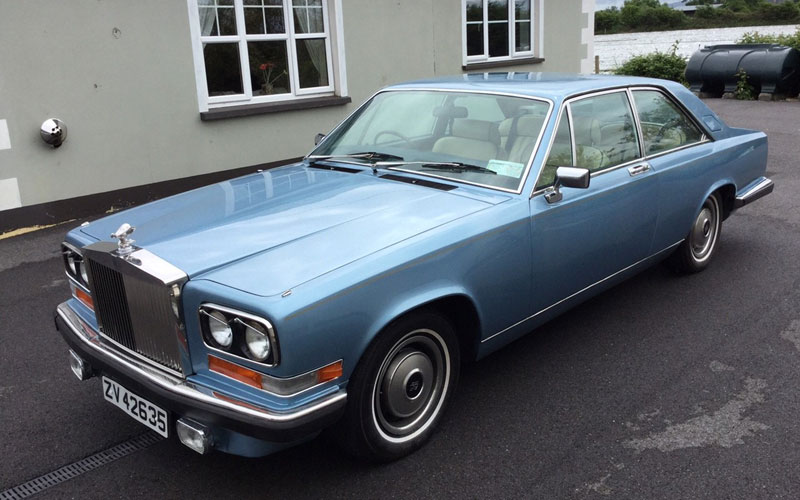 When launched in March 1975, the Camargue was the world's most expensive production car! While it shared the platform of the Shadow and Corniche, the Camargue was the first post-war production Rolls-Royce for which the design was outsourced, and it was penned by Paolo Martin of Pininfarina. The bodies were crafted in London by Mulliner Park Ward. Between 1975 and 1986 just 525 Rolls-Royce Camargues were produced, plus one adorned with Bentley badges.

The extremely handsome-looking right-hand drive example now offered is finished in the pleasing combination of Larkspur Blue bodywork and Blue-piped Beige hide trim. It was ordered via Jack Barclay in 1977 and delivered new in August 1980 to Rex Makin, the Liverpool-based lawyer famous for his association with the Beatles. Following a minor accident in 1997 the Rolls was recorded as Category C for insurance purposes because its then custodian initially insisted that it be entrusted to the Crewe factory for repairs, and there are related invoices on file for a new front bumper and paintwork, dated 1998 and 1999 respectively. The vendor acquired the Camargue from Oldtimer Manchester in 2004, in whose care it has spent its recent life in the Republic of Ireland. It is equipped with a Harvey Bailey handling kit and was treated to body repairs and a respray by Pierce Autobody Services in 2014, and has recently benefited from a mechanical overhaul by Barker Brothers of Dublin that included the brake and hydraulic suspension systems. The vendor presently classes the bodywork, paintwork and V8 engine as 'excellent', the automatic transmission as 'very good' and the interior trim as 'good'. Chassis JRH0050469 is now available for sale complete with handbook, service book, factory build sheets, original sales invoice, tool kit and photos of the bodywork restoration. The odometer currently displays an unwarranted 67,341 miles.

PLEASE NOTE: The rear suspension of this lot has not risen to the correct ride height since it's arrival at the sale. However, there is a bill for two high control valvues in the history file dated 28th July 2009.